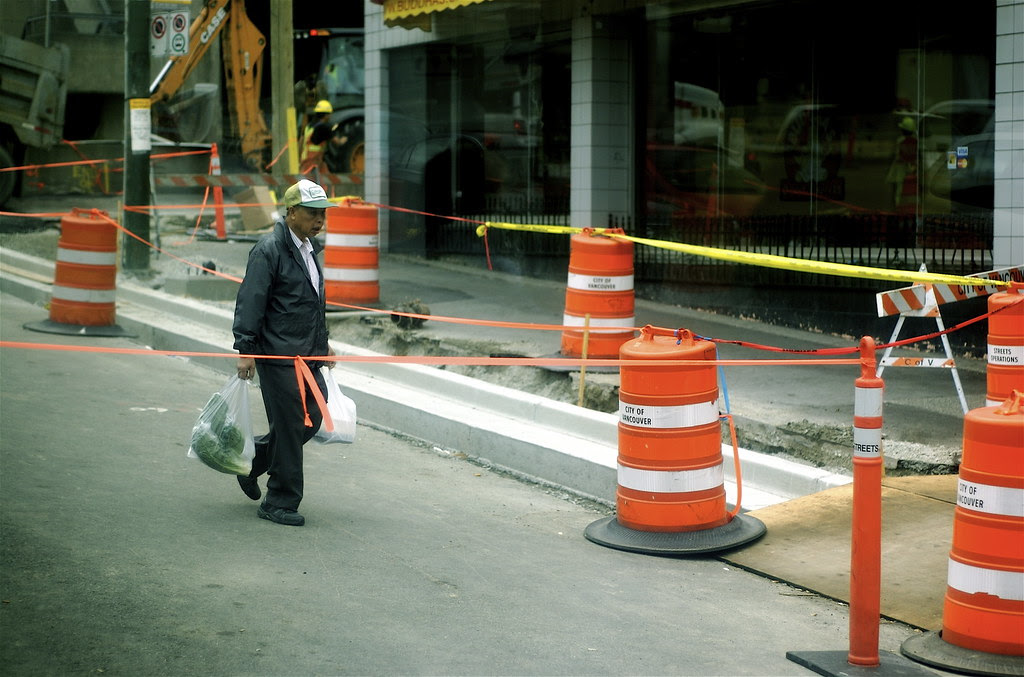 I have been following this case closely for many reasons,I always pull for the little guy and this lawsuit is the classic tale of David versus Goliath,David being Susan Heyes and Goliath being Translink and the Campbell government......

This case has all the elements,lies,deceit,corruption,cover-ups,mis information and most importantly the vicious attack upon tax-paying businesses........

Lets lay out the details,the Canada line after a third arm-twisted vote from the council of mayors the olympic translink line from the airport to Vancouver was given the nod to proceed,next thing was the construction plan itself,an elevated train from the airport through Richmond over the skybridge to the Vancouver side then a bored tunnel to downtown and that`s where this project ran off the rails(pun intended)....

After lengthy consultations with businesses along the transit corridor Ravco (the quazi public/private consortium building the line) cambie merchants were assured in writing that the method of construction in front of their businesses was going to be BORED TUNNEL and the disruption to cambie street and to each business would be a few months at most.....

The Canada line original budget estimate was 1.35 billion$ and was later increased to 1.5 billion $

So the construction is off and running and the builders are spending,spending beyond any hope of completing this project for 1.5 billion$ ....and then they reach cambie street and lo n behold bored tunnel is tossed out the window and a new method of construction known as cut and cover is undertaken..........Translink/Ravco are claiming that by going cut and cover they are saving 200 million$$$ on construction costs.......and 4 years after starting cut and cover cambie street was still torn up businesses closed and going broke .......and any financial help is DENIED!

Lets examine this a little closer,Ravco,Translink, claim to have saved 200 million$$$ by going to cut and cover which may or may not be true,but for argument sakes if they saved 200million$$$ don`t you think if they spread 5 to 10 million $$$ amongst the cambie businesses this whole mess would of went away? I do

So this brings me to Cameron Ward,the lawyer for Susan Heyes,and boy did she pick a smart one...........

So the case of David versus Goliath begins with a little media interest,and lo n behold Susan Heyes wins and is awarded 600.000.00$ to cover some of her loses,case closed right? Not so fast,here with a barrage of lawyers for Translink /government they appeal........Well from what I gather about this case it is "cut and dried"......So off the case goes to court over an appeal request(which is granted) but the judge hearing the case says,not so fast,we will hear the appeal but in the mean time Susan Heyes gets her money......

Wow,thats a strong statement,is it a win for Susan Heyes,a loss or draw,I call it a massive win and with Cameron Ward(crazy like a fox) in her corner a win is inevitable!

For those of you not in the know,here are some details Ravco and the government don`t want revealed.

#1) The media and government claim this project is under budget,well the budget was 1.5 billion and the real cost is closer to 3 billion not 2 billion

#2)The government doesn`t want it known to the public that the operator will be heavily subsidized by Translink for years and years,and this project is a big reason why suddenly Translink needs 450 million more every year or else!

#3) The government doesn`t want the fact that there IS NO PRIVATE MONEY IN THIS PROJECT,to be known,the only contributers to this project are..Ottawa(tax payer) the province(the tax payer) ...Translink(the tax payer) 300 million from the airport authority and INTRANSIT...and who the heck is INTRANSIT ..An adopted name they picked for the Canada line, but what INTRANSIT is.........is a BC government pension fund which has some special protection backstopped by the BC government(the tax payer) If Intransit losses any monies the BC government has to replace the money......SAY WHAT....So where is the risk,the only risk is to the taxpayers!

#4)And I love this one.......The Musqueam first nation`s band were paid approximately 800.000.00$from Ravco because.....The Musqueam made the claim that where the Skybridge crosses the Fraser river is exactly where they always fished for salmon,you mean the Musqueam couldn`t of moved a hundreds yards up stream or down stream to catch salmon?

So,special interest groups,in this case the Musqueam got 800.000.00$ but tax paying businesses that are going or have gone bankrupt get nothing!

Well Cameron Ward,I think Susan Heyes is in good hands,because the senior adjudicator at the FOI (freedom of information) Ceila Francis has granted your request that Ravco turn over all documents related to costs/assessments,concessionaire agreements,aboriginal settlement documents and the like.

What a salvo Mr.Ward.....I expect the appeal to be dropped when you enter in a deal with Ravco to just forget the whole thing,the appeal,the FOI request........Congratulations Susan Heyes

Thanks Grant. I now know all the deatails and I'll keep watching...The BC Libs will bankrupt BC at this ridiculous pace...

Patrick Bell (Not the MLA)

If you really want an eye-opener sometime, look into how much the First Nations in Richmond are making off the Casino deal with the city. I'm pretty sure if you did a FOI on the details of various agreements and payouts, you'd fall flat on your ass.

A little birdie told me to watch for more on this story shortly. Expect even more interesting revelations.....

Just found an intersting video that exposes a lot of the behind the scenes. Vancouver is actually used in this video as an example of what not to do with your transit system. Really quite intersting: