Enbridge Northern Gateway Pipeline Will Be Stopped, The Battle For Life, 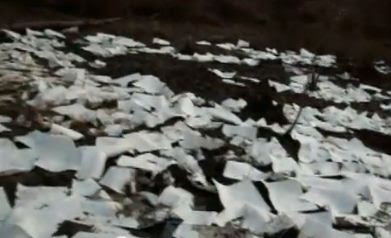 As you know Exxon Mobile, the company responsible for the latest oil spill in Arkansas, the first reports that came out stated the diluted bitumen Alberta tar oil hadn`t reached local water supplies, that lie was quickly exposed as just that..A blatant lie

Then as reported here Exxon Mobile used incredible influence and flexed their big dollar muscles and were granted a no flyover order by FAA, many were wondering why Exxon wanted this power...We here at The Straight Goods knew exactly why Exxon Mobile wanted a no flyover order, to keep the media from seeing oil saturated water, to keep prying eyes from seeing the bright sheen of ecosystem killing pollution..

I listened to Mr. Jones(Lawyer for the Haisla First Nation) question Enbridge`s oil spilled in water clean-up experts, these experts are more commonly known as...

Fluvial Goemorphologists...These experts admitted under testimony that diluted bitumen oil spill in water clean-up technology is a ..And I quote..


In other words, there is no technology that exists, diluted bitumen sinks in water, sticks to the earth, sticks to wildlife and kills everything living it touches...Enbridge would like British Columbia to risk the health of our pristine northern coast, risk our commercial salmon fishery, risk our eco-tourism industry in some grand experiment...

Well Enbridge, British Columbia has said no, Stephen Harper, you have not received or been granted and never will be given social license to pipe Alberta bitumen to our northern coast....

Where was I...Oh yea, back to Exxon Mobile and the deadly Arkansas diluted bitumen oil spill...Tonight I learned, we learned that Exxon Mobile, the second most valuable company in the world, a company worth near a $trillion dollars, a company that has the best experts in the world, the most modern labs, employs the newest fandangled oil spill clean-up technology on earth...The reason Exxon Mobile wanted a no-flyover order in Arkansas was to keep their top secret super duper new fandangled oil spill technology from being revealed to their competitors..

When news emerged last week that Exxon had surprisingly secured a no-fly zone over the area surrounding its 150,000 gallon spill in Mayflower in Arkansas,..

most people thought that here was Big Oil up to its tricks again trying to deliberately stop the public and press from seeing the extent of the destruction from the spill.


So activists from Keystone XL Blockade decided they should go and investigate.

They heard rumours that Exxon was deliberately pumping oil into wetlands to keep it from public view. But when they tried to get to the affected area, they were turned away several times by police and Exxon spill cleanup workers.


But on Saturday they sneaked back to the oily wetlands. What we already knew is that the spill has already killed ducks and other wildlife, which have been found by cleanup workers.


But the footage taken by activists at the weekend says it all. It seems that Exxon has been dumping oil from its Mayflower spill in a wetlands area after all.

And no wonder they have been trying to keep the public away.

The footage (see picture) shows white paper towels scattered over the oil as some unbelievably pathetic attempt to clean up the oil. This is not some banana republic this is America’s backyard and yet the world’s largest and most powerful oil company is using paper towels to clean up a spill and then just leave them there.

If this is the 21st Century cutting edge clean up technology, it’s a complete joke. And it makes you wonder what they would do if there was a spill from the KXL.

This is another example of big oil hiding their crimes against humanity, Exxon Mobile were hiding spilled oil in wetlands..Big oil, and that includes Enbridge have no ability to clean up diluted bitumen in water, paper towels, are you kidding me!...


This will be our future in British Columbia is this outrageous proposal is allowed to happen..


And there also will be war in the woods, thousands will fight to the death to stop Enbridge from destroying our British Columbia soul, the Orca, wild Salmon, Eagles and Otters..Fresh water and spawning beds are more precious than illusionary baubles and beads...Wildlife and water are also needed for sustaining life itself...

Stephen Harper and the Federal Conservative Government will be removed from office if they try and ram this outrage through..

One Way, or another

Thank you Grant for posting this, vancouver scum and globull tv avoid reporting harsh news against corporate oil, enbridge sucks the big one, we are all behind you.

Just heard a thing on CBC radio about how NEB is changing the form for people who want to participate in hearings for energy projects. The new form is 10 pages.