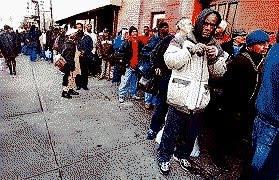 British Columbia has fallen to 9th place in Canada in year over year job growth, an abominable 000.01 Percent growth in overall employment.

BC Jobs plans is an abject failure, this is nothing new, the idea of an advertising campaign creating jobs is and always was absurd, to think jobs are created by advertising feel good messages about potential projects near a decade away, maybe, or never, ...

Christy Clark and the Liberal bragged about being numero uno in Canada in job creation, when the truth tells us we are in 9th place...

Yes indeed, karma, it`s something I believe in, 6 weeks to our provincial election and British Columbia is virtually in last place in Canada in job growth..

Employment in British Columbia was down 15,000, offsetting most of the increase in February. This pushed the unemployment rate up 0.7 percentage points to 7.0%. Compared with 12 months earlier, employment in the province was little changed.

This was a particularly painful jobs report, we lost 22,400 full-time jobs, almost exclusively in the private sector..

Year over year British Columbia added 0.01 to our overall employment numbers, virtually unchanged, that my friends is indeed karma..

Last week the HST died, the weather was beautiful, sun was shining, borders line ups were long, the warmest Easter weekend on record in British Columbia, I went out for dinners twice, fish n chips and Church`s chicken, 7% of tax no longer applies, both outfits were busy and employees grinning from ear to ear, I let these restaurants know that my patronage has returned, my personal HST protest ended.....That is indeed karma...

Last night the Bollywood weekend awards show began, the rain was cold, heavy and constant, so much for Bollywood stars and fans making their way around our streets, weather is supposed to remain wet all weekend, more bad karma..

I wonder how many more BC Jobs plan advertisements we will see this weekend....Maybe the BC Liberals should tweak their taxpayer funded ads, run a new set of ads telling us how many jobs were created in the advertising business, for that appears to be the only industry that had year over year gains..

Here are 100 reasons the lying liebs must be tossed out forever.

Yeah Gordy was a beaut.Anyway the lack of jobs thanks to this Liberal government under Christie Clark is hardly a surprise is it? This is par for the course for right wing neo-liberal governments.You can't have an environment brimming with jobs.Having to offer a competitive wage? Outrageous.If I had jowls I'd waggle them.