Recently I have written about British Columbia moving left and today a confluence of polls have confirmed just that, perhaps the terms left or right are incorrect, British Columbia has finally emerged from its media cocoon and embraced a new path forward, black widow web politics of hatred being spun by Christy Clark and Stephen Harper are failing to ensnare the usual victims, what has emerged from the decades long embryotic slumber are butterflies of the sun...

No longer are we, we the people at the mercy of old stale lazy media, the internet along with creative passionate voices have crumbled the great wall of corporate crime, the systemic takeover of Governments by Facist dictators controlled by sacks of cash and directorships, and as sad as it might be those last remnants of populations living in the dark are dying by the thousands everyday..

Multiple polls showing the NDP taking control of Canada for the first time in history, multiple polls showing our provincial ndp heading for a dominant 60 plus seat majority, this isn`t bragging or gloating this is justice, the years of Gordon Campbell`s lies, the politics of division, years of theft and influence peddling, years of federal politicians using divide and conquer tactics to control the masses, promised prosperity, deliberate lies only to deliver disappointment time and time again..

Some immature writers and bloggers have accused me of being hard core left, a ndp hack when nothing could be further from the truth, my goal has always been one thing, that being good governance, I could care less who was in power if they did the right thing, in fact I`m the only one who gave Christy Clark intelligent advice...

Some of the stories I penned, "Christy Clark, women of the 90`s", the gist of that story is how Christy wants to fight old past battles that don`t exist, big labour against free-enterprise, the threat of big labour unions, years of BC Liberals and Conservatives bashing labour, but what is labour but people, your neighbor, your friend, the family having dinner, imaginary enemies invented by the divide and conquer back-room political machinery, paid hatred advisors that scheme, trick and lie for what big labour is there? Outsource after outsource leaving communities and towns high and dry, Aveos and Air Canada are the latest perpetrators, Caterpillar betrayed Canada last year too, these corporate criminals have systematically sold out the people who built them up only to discard them for cheap labour, $dollar an hour third world slaves..

Politicians with directorships from the same companies whose taxes they lowered subsidized and exempted, the greatest time in history for wealth creation and Joe public is broke, Canadians have never been more indebted, Americans drowning in debt, Europe choking on IOU`s while Corporations write off most taxes, shelter cash offshore and fly the Liberian flag to avoid paying anything,....Gwyn Morgan and EnCana gas, big oil, what is wrong with this picture for now Canadians are being forced to lower wages and give up benefits and be thankful for the crumbs, Stephen Harper lowered corporate taxes on January 1st 2012 and now is slashing $8 billion from the budget, those cuts coming in the food inspection division, coast guard stations, the environment and a thousand other important areas...

I advised Christy Clark to throw Gordon Campbell under the bus along with his MLAs who blindly supported his draconian policies, those policies of a two-class society, rich and peasant, I advised her to remove the HST and stop playing reindeer games but Christy Clark chose to descend into the 90`s and start a fight, to politic with cameras and gimmicks and basically continue down the scorched earth path Gordon and Michael Campbell sent this once vibrant province..

The two Campbell brothers poisoned the education well, infected our hospitals and invited corporate robber-barons to kill our salmon and take the wealth while leaving the fiscal cupboard threadbare, for everything these BC Liberals/Conservative criminals pollinated turned brown, wilted and died, from BC Hydro, the ferries, average wages, forest giveaways, subsidized destruction and when Christy clark stands and defends the actions of those brothers grimm and blames the woes of today on wages of workers, blames those drowning in debt, blames the lowest paid among us and praises free enterprise...

Free enterprise vanished 2 decades ago and was replaced with crony capitalism, these run of river contracts will be reviewed and hopefully shredded under an ndp Government, 30 and 40 years deals guaranteeing that BCers lose $billions per year, where is that free enterprise, building more IPPs river diversions at guaranteed prices to facilitate free power for gas frackers...How is that free enterprise, even the announcement several months back on Jumbo Glacier resort, the builders have been promised a $300 million dollar taxpayer paid road to again facilitate profits for these so-called free enterprizers...

Phil Hocstein and Bobby Plecas...Phil Hocstein has always been a hater too, divide and blame, finger-point and lie, past elections he`s ran cheap attack ads,  those BC Liberal ads of today only serve to galvanize our Province forward, forward under a new Government, one that cares and believes, believes in people, Bobby Plecas wanting teachers hung by their credentials and showcased at the gallows, wedge issues and imaginary battles, stale orators like Billy Good and Philip Til who blindly follow corporate marching orders, dishonest bagmen who would sell their own mother for a sack of cash and advertising dollars, karma has caught up with those fools and the game has ended, people have risen from the decades long media slumber and the people, the real people have seen through the mask..

British Columbia doesn`t believe China and India are our savior because they aren`t, they won`t buy Canadian made products they want mother nature`s wares on the cheap, the pipeline to hell will not be permitted to destroy our iconic species, the Raven, the Spirit Bear, Orca and the majestic bald eagle, Corporation Enbridge and their sea of lies, that game too is over..

Stephen Harper`s world of tyranny and private scripture are burning on the Parliament steps, it truly amazed me the speed at which his radical agenda has crumbled, Canadians now reject Stephen Harper on a 4 to 1 ratio, his fables of ndp Governments transferring wealth of the hard working to the poor are falling on deaf ears, even those bloggers that pimp BC conservatives and decry the ndp as destroyers of business, those who swear to launch attacks upon the left are firing blank hyperbole invented in their mindless self aggrandizing drool...

British Columbia is ready for Adrian Dix, yes I wanted John Horgan for I feared that memo-gate attack ads would come in droves, and in droves they did..although I didn`t expect those attack ads to come from leaky condo builder Phil the shill Hocstein 18 months before our election, but from the party of hate, the party of Christy lost in the 90`s Clark, and yes they came early from her in the form of risky Dix, even the uncalled for dour stalinist label created by the worst journalistic writer in mainstream media, that being Michael Smyth, they didn`t stick either, perhaps one day Michael Smyth will learn to research a story and actually write something credible, or interesting, I won`t hold my breath, Vaughn Palmer with his written sleight of hand articles where he pretends to criticize the Liberals in the title only to go sideways with his patented Palmer technique....

The numbers are huge, the BC NDP have a 12% percentage point lead over both Christy Clark and John Cummins isn`t resonating at all, near 50% support for Adrian Dix, more support than the BC Conservatives and quazi BC Liberals combined and that`s after Phil Hocstein and Christy Clark and cknw`s corruption facilitators blew their load in an early hate spewed ejaculation....Yes indeed, big media and the stooges satisfied nobody and solidified the next provincial Government...

That being Adrian Dix and the New Democratic Party of British Columbia.

Thomas Mulcair and the New Democratic Party of Canada running the Government of Canada.

They deserve their shot and Canada and British Columbia will oblige.

It`s our last chance friends, conservatism and corporatism is dead, the era of people and workers first has arrived, we are the messengers born of the sun.. 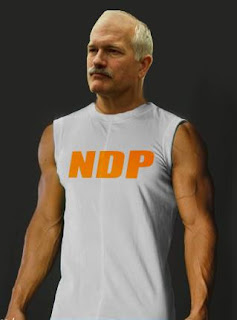 I have been an NDP supporter since 1972 and worked on Dave Barrett's campaign in Prince George. We won that against all odds. The one night I will never forget is Dave Barrett's speech at the Simon Fraser hotel ballroom. That was the night I became a life long NDP supporter and campaign worked. Dave Barrett as was his custom, took off his suit jacket and rolled up his sleeves and deliver an unforgettable evening for me. I'll never forget him walking amongst the crowd delivering nail after nail into the Social Credit coffin. Then afterwards we went to the Inn of The North pub and drank beer with him. How could you not vote for someone like him. How could you not support the NDP? This man from a working class neighbourhood, the Premier of the Province in waiting having a beer with us working stiffs? A memorable night for me. What a great man he is and that's why I will always vote NDP, they are you and I.

and I hope you are right that:
" these run of river contracts will be reviewed and hopefully shredded under an ndp Government, 30 and

40 years deals guaranteeing that BCers lose $billions per year"
OF ALL the evil things the BC Liberals/Conservative criminals have done in the past 12 years,(and the list is long) The destruction of BC Hydro is the worst .
The conspirators should all be thrown in jail.

Awesome post Grant. So are you expecting a poll from Forum/National Post tomorrow claiming the Libs now lead the NDP by 10 points? Forum polling is so phony even the Vancouver Sun won't give them the time of day. CBC is no better. I turn the 12pm news on today and what do they say? "All signs point to a close race in the BC election" Why does the MSM continue with lie after lie after lie...ad nauseum. We are becoming more like the US every day and I find it damn scary. Big media must be defeated and exterminated.

Thank you for a very well written and uplifting post for all the hard working people in this province.