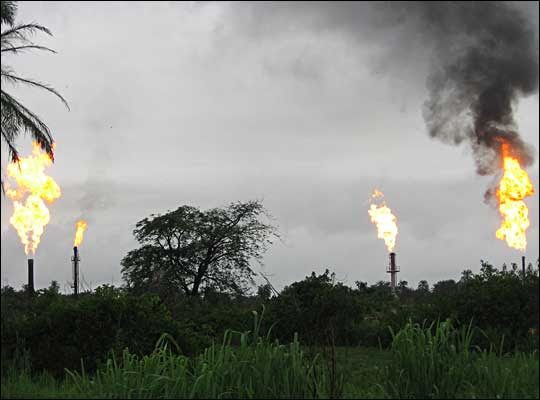 According to the world bank,about 100 billion cubic meters of natural gas are burned off or vented every year-the equivalent of all the annual gas consumption in England,France,and Germany combined. (PART II in the series)

Before we get started lets talk about Marc Jaccard.

Two days after the NDP came out with their election platform Marc Jaccard came out with his latest trash paper,the gist of his paper was that the NDPs plan to go after gas flaring and cap n trade was going to cost 60.000 jobs. It`s a long paper,how he managed to rejigger his numbers in two days is a mystery to me,anyways,the phony Jaccard was only concerned with possible job losses,none of it provable one way or another,so the BC Liberal paid spokesperson Jaccard wants the consumer carbon tax to save the world.....

Lets examine that, first off Jaccard is on the record stating that the BC carbon tax WILL NOT WORK unless it is 20 to 30 times more expensive than it currently is,in other words,Jaccards admits that Campbell`s carbon tax won`t work until people can`t afford fuel. Yet Jaccard fails to address the fact that most of the province has ZERO transit or train options.

But that didn`t get in the way of Jaccard pimping for Campbell,no siree bob, Because nowhere in Jaccards (two day,rushed together paper to attack the NDP) does he raise the slightest concern over the massive coal exports from BC or the 63 million tonnes of carbon those exports emit in to the atmosphere, or nowhere does Jaccard mention the 1.8 million tonnes of carbon emissions per year by the gas boys in BC each year...No,instead of Marc Jaccard wanting to get on board the world fight against gas flaring or coal emissions,Jaccard was only interested in Campbell`s useless gas tax to joe public.....

Marc Jaccard didn`t mention in his rushed paper that ICBC one year after the Campbell carbon tax had been initiated had 90.000 more registered vehicles driving in BC, no that little fact seemed lost in his paper,nor has he written an updated paper now that there are 130.000 more vehicles on the road,nor has Jaccard responded to the HST being applied to super energy efficient appliances,or the cancelling of the home smart program,apparently Marc Jaccard only cares about his useless Carbon tax.

It is my opinion that Marc Jaccard`s work is badly flawed,his job numbers are pulled out of thin air,the jobs would be there if the massive profits in the gas sector remain,it is also my opinion that Jaccard has done far more harm than good, instead of promoting real tough measures against industry,instead of trying to start a world movement against flaring he has opted to promote a tax that attacks BCers with no choice to get around,add that to the fact that Jaccard himself has admitted publicly that Campbell`s carbon tax in it`s present form WILL NOT WORK.......I don`t believe your worthy to teach students Jaccard, perhaps you would like to write a new paper about the HST in BC not applying to fuels at the pump,or cancelled home smart program,or taxing energy saving appliances, your silence is deafening Jaccard,and you have caused more harm than good,because instead of a real,mutli pronged strategy we have wasted years on a useless carbon tax.Sleep well eh Jaccard! You can read Jaccards trash paper here,it`s lengthy and full of unproven assertions,and it was put together in two days after the NDP platform was released.

Here is a special guest article by Mitchell Anderson

Feel like you`re doing your part for climate? Changed your light bulbs? Riding your bike? Like many British Columbians,you are probably pitching in to try to reduce our collective carbon footprint.

Now if we could only get the natural-gas industry to stop dumping 1.8 million tonnes of co2 into the atmosphere every year due to gas flaring,we might be getting somewhere.

It is a little known fact that the B.C. sector of this industry "flares", or needlessly burns off,about 960 million cubic meters of natural gas every year.That remarkable waste of finite and relatively clean fuel is enough to heat more than 300.000 Canadian homes annually.

According to Steve Simons,corporate-affairs director of B.C.`s Oil and Gas Commission,B.C. flares 2.9 percent of annual production,which in 2007 was about 33.1 billion cubic meters of gas.

That means the B.C. gas industry flares almost one billion cubic meters of gas annually,producing about 1.8 million tonnes of carbon dioxide.This is approximately 2.8 percent of the total carbon emissions for the entire province.

So why do companies burn off the very resource they are drilling for? According to Lee Shanks,spokesperson for the the Oil and Gas Commission,companies flare gas mainly to release pressure in their systems. "it`s sort of like a tea kettle; it`s to let pressure off" Gas is also flared during well testing and maintenance.

The B.C. government also committed in the 2007 throne speech to eliminate gas flaring by 2016. However,the fact that Victoria made that commitment indicates that this type of waste is entirely avoidable.

Worldwide,this wasteful practice remains a huge problem.According to the world bank,about 100 billion cubic meters of natural gas are burned or vented every year--the equivalent of all the annual gas consumption in England,France,and Germany combined.It is also an enormous waste of money.Gas flaring squanders about $31 billion in natural gas annually.

Here in B.C., wasted gas was worth almost $300 million in 2007. The B.C. government would of also have collected more than $49 million in additional gas royalties had that public resource not been squandered or if royalties were charged on gas flaring.Even under the new guidelines to reduce flaring,royalties are not charged for wasted gas.

We should also not forget the human-health impacts of burning off unwanted and often unrefined gas in the atmosphere.Incomplete combustion from flaring can release many known carcinogens,such as benzene,toluene,xylene,and polycyclic aromatic hydrocarbons.

The B.C. office of the Canadian Center for policy alternatives released a september 2007 report on this issue called foot off the gas: Regulating B.C.`s Oil and Gas industry As if the Environment mattered.According to its author (and occasional Straight contributor). Ben Parfitt, flaring is symptomatic of a wasteful industry mindset fostered by a long history of government subsidies to encourage growth. B.C. gas production has increased by more than 40 percent during the past 10 years, a pace he feels cannot be maintained.

"We need to be very focused on the fact that the resource being exploited is finite,that it might only have a shelf life of only 17 years or so if we see a doubling of gas production," Partiff said in an interview. "Therefor we need to be doing everything we can to ensure that we get a fair dollar value for the gas being pulled from the ground and that we don`t waste it."

_Partiff and the CCPA feel that immediately charging industry a royalty on every unit of gas that is flared would be a step in the right direction. "That would send the message right away to industry that they need to find a way to end those practices," Partiff said.

Ending subsidies to this already lucrative industry would be another positive move.Every year,the B.C. taxpayers shovel about $260 million to the oil and gas sector.Much of this largess is to encourage questionable practices,such as developing marginal or drilling muskeg-damaging wells in the summer when the ground is not frozen.

Is Victoria moving to reduce these subsidies? NO. In fact,the most recent budget,they are slated to increase by 24 percent in 2008-09, to $327 million.

The B. C. government continued coddling of the natural-gas sector only undermines efforts to reduce our carbon footprint.We should note that the carbon tax is a retail tax that only applies to you and me.Flared gas is not taxed for carbon emissions,Neither is the entire industry.

( Burrard thermal is next in the series part III )

After reading your articles, you have me convinced. BAN ALL COAL MINING AND NATURAL GAS in BC!!!!!

Why don't the stupid NDP have this in their election platform???