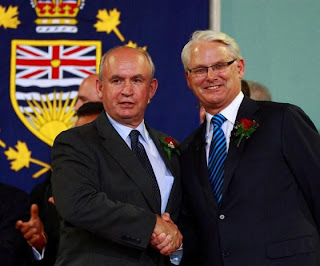 Dear all members of the B.C. Liberal Government, it has come to the attention of all British Columbia citizens that your previous leader Gordon Muir Campbell signed a deal in a secretive manner that surrendered British Columbian`s sovereignty and control over major contentious industrial projects to the Federal Government. That secretive agreement signed on 21st day of _June, 2010.

British Columbians have been wondering why the current leadership and administration has refused to take a position on and or even submit an application for intervener status on Enbridge`s Northern Gateway pipeline, that riddle has been solved...

Pursuant to this secretive agreement...The B.C. Government is unable to apply for intervenor status, clearly Christy Clark and members of cabinet were aware of the reason for staying silent on Enbridge, they had no legal grounds to make such an application, those rights were ceded.

The question I pose to all B.C. Liberal MLAs, especially backbenchers...How many of you were aware of this secretive agreement, were you told ahead of time, were you told at all, if you weren`t told and you discovered this information in the same fashion as British Columbia`s populous, through Robyn Allen`s breaking news..

When this project is rammed through, when the inevitable inland spills happen, when a super-tanker crashes in Canada`s most treacherous, roughest and windiest waterway and coats thousands of kilometers in oil, ruins a huge swath of our pristine Northern coast for generations, when species vanish for eternity, will you be able to live with yourself?

NATIONAL ENERGY BOARD
("NEB")
AND
ENVIRONMENTAL ASSESSMENT OFFICE OF BRITISH COLUMBIA
("EAO")
WHEREAS certain Projects are subject to the National Energy Board Act and also may meet or exceed thresholds established pursuant to the British Columbia Environmental Assessment Act, S.B.C. 2002, c. 43 (“BCEAA”);
WHEREAS the Parties wish to promote a coordinated approach to achieve environmental assessment process efficiencies with respect to such Projects;
WHEREAS sections 27 and 28 of the BCEAA allow the British Columbia Minister of Environment to enter into an agreement regarding any aspect of environmental assessment with Canada or its agencies, boards or commissions and provides for accepting another party's or jurisdiction's assessment as being equivalent to an assessment required under the BCEAA;
WHEREAS any assessment of a Project pursuant to the National Energy Board Act would take into account any comments submitted during the assessment process by the public and Aboriginal peoples; and,
WHEREAS the Minister's section 27 powers have been delegated to the Executive Director of the EAO.

Enbridge Northern Gateway pipeline is one of the projects whereas B.C.`s sovereignty has been ceded to the N.E.B.(National Energy Board), whether or not you as individual members of the B.C. Government agree or disagree with this project is secondary to the betrayal of ceding jurisdictional authority to decide our own fate, clearly this act committed by Gordon Muir Campbell falls outside of partisan boundaries.

This historic betrayal will clearly be the final nail in this current administration`s coffin, the BC Liberal Government will surely fall next May 14th/2013...However you as individual members can become household names, and British Columbian heroes by simply crossing the floor and sitting as either members of the official ndp opposition or sit as BC Conservatives or preferably independents as John Cummins is in favour of Enbridge`s Northern Gateway pipeline.

As independents, if 4 or 5 members of the current B.C. Liberal Government cross the floor the present administration can be terminated, as independents responsible for bringing down a immoral Government your political stock would rise, as independents responsible for changing this Government your ticket to re-election would almost be guaranteed, and even if that didn`t happen you as moral-high-ground-defectors would be able to look in the mirror or look your children, your grandchildren in the eyes and say...

Kash Heed, you will not get the nomination to run again, you can make right your election indiscretions of the past by assisting in returning the rule of Democracy and Provincial sovereignty.

Jane Thorthwaite, you too will not get the nomination to run again, you too can make amends for your ill-fated decision to drive while under the influence, you too can assist in returning British Columbia`s sovereignty.

John Rustad, rumors are rampant that you too are disgruntled with the present administration, partisan politics aside, can you state that this secretive agreement Gordon Muir Campbell signed when the house wasn`t sitting in the middle of summer is appropriate, were you aware of this secret agreement and can you condone the current B.C. Liberal leader for not telling the voters the reason why British Columbia`s Government refused to take a stand or apply for intervenor status. Can you justify Christy Clark keeping these facts from the public?

DR. Moira Stilwell, you are an esteemed doctor, as a doctor you signed the Hippocratic oath, an oath to protect patients above all else, would you sign an agreement relinquishing that oath? Do you believe in Sovereignty, do you believe in Democracy or secrecy?

Naomi Yamamoto, Japanese people as far as I know are among the most honorable people in the world, can you point to any honor in this secret agreement, can you reasonably justify that secret agreement? And if you can could you explain why unelected premier Christy Clark failed to inform the public?

Christy Clark has brought in Ken Bosenkool, he`s a Enbridge lobbyist, a member of Stephen Harper`s inner circle, Sara Macintyre and others from Stephen Harper`s team also, clearly there is a pattern developing where British Columbia is being controlled by Ottawa.

Linda Reid, can you condone this secrecy, can you explain why there was no press release on June 21/2010...One week before the HST was implemented.

None of you MLAs were privy to Gordon Campbell and Colin Hansen plotting before the 2009 election to bring in the HST, you have all paid a very heavy emotional price for Gordon Campbell`s betrayal, you B.C. Liberal MLAs have had your phone ringing off the hook, your email box overflowing as well as ridicule from your own constituents, meanwhile Bill Barisoff broke the nominating rules to expedite Gordon Muir Campbell getting the order of B.C...

Meanwhile Gordon Campbell was rewarded with his OBC and Stephen Harper rewarded the same Gordon Campbell with a $250,000 per year ambassadorship, a driver, a residence, a chef, the man who betrayed British Columbia is sitting in the lap of luxury while you MLAs are losing sleep every night.

The B.C. Liberal Government will fall on May 14th 2013....Asset sales have been announced, the current administration is just as secretive and immoral as the last, they have no mandate from the public to sell the silverware to pay our provincial credit card, selling assets is one thing, selling and ceding our provincial sovereignty is another thing altogether.

All it will take is 4 MLAs to do the honorable thing, 4 of you can make the difference and end this current administration.

As a citizen of this beautiful Province, me and 4 million British Columbians implore you to do the right thing, the madness must end.