Chuck Strahl..Stockwell Day..Mike De Jong...Bill Bennett..Pamela Martin,, Even when the BC Liberals started campaigning illegally before the writ was dropped..None of those black holes could help save the BC Liberals!

Forget about historic riding results from the past, the past didn`t have the internet and new honest media..Bloggers, ...

People get real news from me, from Laila, from Ross K, from Merv Ritchie and others..

Stephen Harper is a pariah, a black hole..It`s not party affiliation, it`s not ideology, it`s issues..

So much for the pros...Check out the below story where yours truly called the Gwen O`Mahony victory......

And that prediction was last week, April 13th..Who says Friday the 13th is unlucky.....And for the curious, from my April 13th post...This is the number predicted..

It appears my prediction and vote percentage was BANG ON..Hmmmm


Thomas Mulcair and BC By-Elections. 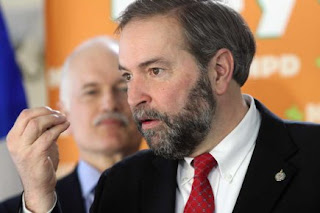 Here comes the Big Orange Star, a true professional, Thomas Mulcair, this man is an ideal leader and in the latest Federal poll the NDP are in a dead heat with Stephen treason Harper`s Cons...

But there`s more, the Federal NDP have a staggering double digit lead in BC over Harper and the Cons, which brings me to the point of this post, Phil Hocstein, Michael Smyth and certain bloggers have totally missed the mark on their perception of the political wind in this province, people are awakening to what right wing parties are really about, CRONY CAPITALISM....Free enterprise vanished 2 decades ago, the occupy movement, we, they may not be presently sitting or occupying any public spaces but the movement and mindset is alive and well, in fact it has grown in intensity...

Below is from a Federal poll showing rising support for Big Orange Star.
________________________
OTTAWA — After enduring weeks of criticism over robocalls, the F-35 and the budget, the federal Conservative party is virtually tied with the NDP in public opinion, suggests a new Ipsos-Reid poll conducted exclusively for Postmedia News and Global TV.

But the controversies haven't stuck to Prime Minister Stephen Harper, who continues to enjoy strong approval ratings throughout most of the country.

The survey found that if an election were called today, 34 per cent of Canadians polled would vote for the Conservative party, compared to 37 per cent last month and 40 per cent when the last election was held on May 2, 2011.


In contrast, 33 per cent would vote for the NDP, which is up from 29 per cent in March and 31 per cent during the election.

What we see in this poll is the NDP on the rise across Canada and Harper`s support tanking, that is real bad news for John Cummins..

As you know I didn`t endorse any Federal NDP leaders, I knew either Brian Topp or Thomas Mulcair would win and was equally happy with either candidate as leader, also, Thomas Mulcair was the very best candidate for the NDP to keep the strong support levels in Quebec, this man has impressed me from the very first time I heard him speak, a fabulous communicator, he has John Horgan type qualities, once you meet him, hear him speak with concise  clarity combined with a level of charm unmatched by any political leader in Canada, this too is very good news for the Big Orange Star...And the really big story in our province, even before the NDP chose a new Federal leader they were slamming Harper`s Cons in BC..
__________________

According to a recent poll by Justason Market Intelligence, popular support for the governing Conservatives has fallen from 46% in May 2011 to 30% currently, now behind the official opposition NDP (at 40% from 33%).
Support for the Liberals also has grown, from 13% to 20%. The Green Party has held steady at 8% since the election.

The Justason poll also finds a strong majority of BC residents (73%) opposing the Lawful Access bill (Bill C-30, also known as the Protecting Children from Internet Predators Act). Notably, over half of BC residents strongly oppose this legislation (55%). Seventeen percent (17%) support the legislation, with 5% strongly supportive.

The question: “The Canadian government is currently attempting to pass the Lawful Access Bill, also known as the online surveillance bill. This bill would force internet and telecommunications service providers to hand over basic information about their clients at the request of law enforcement without a warrant. It would also allow that data to be duplicated without permission. Do you support or oppose this proposed bill?”

Now to the by-elections, let`s be clear, my predictions mean nothing, it certainly doesn`t require..a "BREAKING NEWS" headline announcing my own picks on my own site, funny stuff eh, ..

Joe Trasolini wins in a cake walk, he didn`t need a single endorsement, an ex popular mayor, a mayor for years, a harsh critic of the BC Liberals for years, especially on the evergreen transit line stall game and Burrard thermal, yes indeed Joe Trasolini is in favour of keeping burrard thermal for all the right reasons, it`s an ideal back-up power supply that BC owns, no need for IPP ripoff long term contracts bankrupting our province, Burrard thermal is a tiny emitter of GHGs compared to Lafarge cement....Trasolini would have won this election running for the NDP even if the Liberals didn`t implode over corruption, scandals and betrayals..

Below are the 2009 election results for Chilliwack Hope

First off, the Greens aren`t running a candidate, those Green voters will NOT go to the Cons or the Liberals, Gwen O`Mahony received just over 33%...Now remember, the BC Liberals weren`t hated(near as much) in May 2009..

I guarantee that the BC Liberal`s vote won`t completely collapse in Chilliwack-Hope...But as you can see Gwen is already well over 1/3rd of the vote, almost 40% in fact..

BC Liberals have lost half their vote, but here we go again, at least 5% of the BC Liberal vote support has gone to the NDP, maybe more, John Cummins is from the old Reform part of the Conservatives, abortion, cut Government services, privatize everything, religious dominant thought processes..

Also, there is a very strong Environmental vote in Chillwack-Hope, with Enbridge threatening and now Kinder Morgan, I suggest that many centrist voters from the Liberals would rather go NDP than Harper`s Reformer`s farm team, not to mention Harper`s pension and health care cuts...Still with the environment, Gordon Campbell in 2009 had hoodwinked BCer`s(some) into thinking he was green, carbon tax, carbon trading and offsets, Liberals have thrown out all of their green credentials with LNG, fracking, incinerators, Fish lake, now the assault on the ALR, and more IPPs...

I`m adding another 4% points of support to Gwen O`Mahony, giving her a total of..

42% of the vote, a clear winner...Yes indeed, Gwen O`Mahony will win Chilliwack hope, an NDP sweep in by-elections.

The NDP are on the rise in BC, and across Canada, the latest poll(Angus Reid) has the NDP at 46% support levels in BC.

I think both candidates for the Big Orange star are fantastic....I`m not endorsing and this isn`t breaking news, these are my predictions, Trasolini is a wall in Port Moody, no brain surgeon required to make that call, and Gwen O`Mahony in Chilliwack...The numbers add up...Common sense.

My pulse on the people is usually spot on,  even at 40% support Gwen O`Mahony wins easy..

Harper has turned into a black hole, the wheels on his bandwagon are broken and people have had enough of crony capitalism for the select few being called free-enterprise..

Great news on all fronts grant!
My hope is that now Dix can be confident enough to hit the issues hard!
Loved the "fish Story" all seems to be well today with the aside of Levon Helm passing.
Don

Grant please don't assume that green votes will go NDP. I know a lot of these voters and they really have a problem with unions (working class) and progressive taxation. They stick to the GP like glue. If they were so easy to cross party lines why on earth does Elizabeth May continue to keep to a separate party? She could have so much more influence within another party but she always chooses to stay away from all of them. Telling isn't it. Tells me the environment is not first as it should be.

I`ll assume what I please..

No one had the correct prediction in the Chilliwack by election except..

Thanks Don F....Thanks a whole bunch..

Fish Story wrote itself, nothing but a pleasant memory tucked away upstairs..

As did this one, it makes you think though..

Bernard Schulmaan and El Bloatto were so far off the mark..

Those that claim political GOD status, seems to me they know nothing!

Gregor Robertson victory proved the point too, Bloatto was a mile-wide. watch for the excuse-fest

Phil HACKstein and all those Federal Cons..

All the money, the endless pimping for the corrupt Christy party fell on deaf ears.

The silver set is the only demographic not online in big numbers..

The old right wing left wing divide is over..

Today power rests with being on the "correct" side of issues.

Today confirmed what I and others have been saying for a few years.

A monumental shift happened today and the new electronic media is the winner..

Today bloggers compete with the New York Times, maybe not as individuals but connected, networked, voice to voice, hyper link to hyper link..

How about:
1. BC Rail scandal.
2. HST.
3. BC Hydro being bankrupted by having to buy $42 billion worth of IPP power.
4. $930 million smart meter boondoggle.
5. Taking $millions out of schools and hospitals to give to companies like Encana.

Maybe the above had something to do with it.

"The silver set is the only demographic not online in big numbers.."

Just want to remind you, I would be considered amongst the "silver set."

". Although, I strongly advise you all to watch Christine Clarke in Port Moody. She will do much better than most think and surely place second. If she wasn’t running against Trasolini, she’d beat Dennis Marsden, hands down."

Marsden only got TWICE the votes that Dummy's namesake got. Of course maybe her name was toxic among the low info voters.

El Bloatto this morning must be scraping gum off his shoes, wandering back alleys looking for solace..

Solace in the bottom of a dumpster.

and then the expert doubles down:

He needs serious help. At worst, the BCCP comes in second in both–eviscerating the vote-spliting argument by the Liberals."

Bloatto was claiming to be talking to people on the ground, insiders, talking to everyone, he claimed he knew what was going on..And late last night Bloatto made the claim..

"They must have run bad campaigns"

I thought he knew, where, who, what, why and when..


It`s what I have been saying all along ..

"Behind the curtain Oz was indeed pulling all the levers"

The Bullshit Express and or the National inquirer, call it what you will..

Now the watch those fucktards in the MSM work some serious overtime to hook-up the two right wing parties...or at least try to get all the right wing voters to back crusty the non-premier, they'll use every trick in the book and then some.I can see NW Global CTV etc giving Phil Fuckstein his own daily rant and the Stun giving him a daily column.

You know for sure , rats are scurrying . good riddance to low class BC Liberal scum-bags , you will not be missed unfortunately with the damage this party has done to BC they'll be hard to forget .