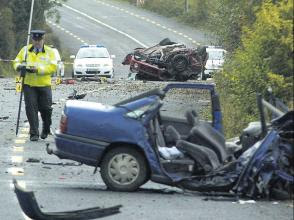 CBC has a poll today, asking, "should public offials be required to step down?" I voted. I think it was 72% voted Yes.

Gordon Campbell has set the precedent for politicians not resigning after a criminal act, therefore Jane Thornthwaite will not resign.

If me or thee has been caught DUI, of course much more will happen, but Jane Thornthwaite is special, she is a Liberal MLA and Liberal MLA's are above the law.

"I haven't committed a crime. What I did was fail to comply with the law." Ms. Thornthwaite's motto.

The first funeral that I ever attended was for my Aunt, Uncle, and my two nieces. It was an impaired driver that sent them careening into the next world.
I am not a fan of impaired drivers, or their feeble "explanations". Never have been.
I can't imagine why............

I don't care WHO you are,there is no reason to drink and drive. Ever. There is NO excuse either.

Until police, judges, lawyers, and politicians are not allowed to hide behind their elitism...nothing will seriously change. I don't accept their "one law for me, another for you" thinking. That people are still dying as a result of drinking drivers is unimaginable! That drinking drivers keep pulling that roulette trigger until someone gets killed is beyond the pale. That judges keep slapping them on the wrist, and letting them go one more time, is disgusting. It says more about who they are, and how they think, than they know.

How to start changing the mindset that sees drinking and driving as a "non-issue" and stop the repeat offenders...

For a start; make them help clean up accident sites where drinking is thought, or known to be the cause. Perhaps cleaning the remains off whatever surfaces will jar them awake.
Make them tell the family of the deceased what happened...that their family member died at the hands of a drunk driver. Make sure they're there long enough to witness the personal devastation of their secondary victims.
Make them attend the autopsy of every person killed by a drunk driver.

In short, take the damn kid gloves off. Stop treating them like they have a dreaded disease...and treat them like the addicts they are. Addicts who may have killed someone through their own selfish wants, or actually did kill someone.

That includes you Mr. Campbell, and you too Mrs. Thornwaite. To my way of thinking, there is no difference between either of you...and a junkie in DTES. They just admit their problems, and ask for help. It's called integrity.

I caught the second part of Christy Clark's segment on this issue this afternoon, and was absolutely flabbergasted to hear her say that this woman should not have to resign.

It was only a month or so ago that she was ranting and raving about the fact that Monty Robinson was not being charged with impaired driving stemming from his killing of a motorcyclist in Delta not too long ago.

I also thought it was disingenuous for her to state that Mrs. Thornthwaite was not found guilty of any offense so far. Hell, this woman has publicly admitted her guilt and I doubt even Johnny Cochrane could get her off by fighting a charge of impaired driving. One thing Christy stated is that Mrs. Thornthwaite has yet to be charged, and that has me a bit worried. Will the AG interfere on Mrs. Thornthwaite's behalf, such as a downgraded charge(plea bargain)to make sure that this woman avoids the embarrasment of having a criminal record? Remember that anyone that has a criminal record could easily be denied entry to the USA and face other possible restrictions.

I still have doubts that we will ever see a trial in the Basi-Virk affair, and the same may occur regarding Mrs. Thornthwaite. Our justice system seems to have too many ways of of being coerced by our politicians.

A fews years back Wally's shady bro Harry, who is now a Royal LePage realtor (used to work in bars) and his broker bud Don Estrada,(allegedly!) pulled off a shady land deal. Harry got a woman's elderly parents to invest in a large house and property in Abbotsford. Harry then rented it out and personally collected $3,930 cash rent each month and personally deposited it to their daughter's bank account. Very good service! Long story short the deal went bad and the daughter looked into it (she sounds somewhat shady too but...)the parents ended up losing all their life savings. Wally made out he didn't know anything about it, then he did, then he didn't, and he never!! told Campbell about it! The house had been completely gutted and a huge grow op was alive and well. Anyway the long and short nothing was ever done about it. So....do I believe Kash Heed will 'interfere' on Thornthwaite's behalf too?? Uh, ya! Kash Heed IMO is not AG material, having quitting the West Van Police Dept. right before he was going to be charged for interfering in a pedofile case. You probably remember that one. By quitting they couldn't charge him. And that's when Campbell was delighted to hire him for our new AG. Campbell seems to like to surround himself with shady AG's, wonder why! I remember the Harry case because I had known him years back. He was a loud mouth shady wanna be even then...If you want to read more details of the Harry Oppal deal google Harry Oppal criminal charge. Joey Thompson also wrote it up. Shadys surround themselves with shadys.
Such a disgusting crew the B.C. Liberals are.


Hello Gary This article is a bit off subject,but : Stephen Harper reacts with the same arrogant attitude as Campbell.
And Junior cabinet minister Helena Guergis has issued a bogus apology much like Mrs. Thornthwaite.

seems to be the norm across the political board

Quote from the article
A spokesperson for Prime Minister Stephen Harper said of her apology: "That's the end of the matter as far as we are concerned."

I hate to judge people by names but Thornthwaite says it all,hoitey toitey,I don`t think Hash Heed will interfere,I do believe she will pay the minimum/minimum of consequences,as for Wally Oppal and Kash Heed..

Kash Heed`s hands are dirty,the shit was going to fly in West Vancouver,he fled to the safety of the BC Liberals,Heed is a marshmallow.

Just before the Thornthwaite episode, as you know we presently have no chief judge in BC, Gordon Campbell wants Wally Oppal to be that judge.
But,the chief judge is chosen by a 9 member panel of the judiciary,and,apparantly Oppal doesn`t qualify because he isn`t a sitting judge,rules will have to be broken to appoint Wally Oppal,

But,I wrote that last week,Wally Oppal after I wrote that made back to back appearances on CKNW...First on the John Malcolm then following day on the Christy Clark show,oh indeed friends,the brainwashing has started,the brainwashing about how great and honourable Wally Oppal is...Expect Oppal to be appointed as chief judge within a month(expect a court challenge to be filed to fight it)

One more thing,I heard through the grapevine when Gordon Campbell made an appearance at Molson Hockey house a few days ago, he got booed right out the door!

I can`t emphasize enough about road carnage from drunk drivers,until public figures lose their jobs and pensions,nothing will change.

MY Gawd, Wally Awful as chief judge, might as well appoint one of the Bacon brothers as they seem to be on the same moral playing field.

The Bacon Bros and other organized gangsters will be set free too and never see the inside of a court room. This was just another look-good Campbell/police expedition. Guiliani's probably costly meeting with Watts and Campbell on how he cleaned up New York, now one of the safest states, didn't seem to register. Nothing changes. Campbell IMO!loves organized crime, he doesn't get any income taxes from them but they sure help his 'economy'. Campbell clearly cares nothing about law and order, the criminal that he is.

As heavily supported by organized crime as the BC Liberals are, why would anyone think something like a DUI would stop them?

Do you suppose the drunken driver in this latest accident is taking..

Grant, how do I send you some information I think you might find interesting?

Call me on the phone.

Drinking and driving, is a criminal offense. However, that just depends on who you are. One of the officers, involved in the death of Robert at Vancouver Air Port. He went on to offend again, this time he struck a young man on his motorcycle, and killed him too. The asinine statement he made was, he walked his children home and drank booze. He left the scene of the accident, walked away, and left the poor guy to die. I guess dead men can't talk, can they. The people of BC, do not want the RCMP's contract renewed. Some, do not want the RCMP, as an icon for Canada. However, that's okay, we don't want Campbell and Hansen either, they are considered, liars and criminals. They have no right being government officials. BC, is second from the bottom for, being the poorest province in Canada. Campbell, is known, as, the worst corrupt premier, in Canadian history. Hopefully he goes to prison and Hansen is his cell mate.

You people are boring. Continue your rants to make yourselves feel better but have you ever driven by a pub? Parking places are there for a reason....she was over the limit by a bit and yes she made an error but for her to lose her job over this is so ridiculous. She'll pay through a judge not through your holier than thou morals and don't cry to me either as I don't care to hear your stories. You are not the law or the judge so go away.

Well, let me see, the Liberal party of BC, supports, drunk driving. Campbell of course, blubbered sympathy, and told Jane not to resign. This was of course, was for Campbell's own neck. If Janie resigned, he would be obligate to do so himself. Soooo, does this mean, Campbell and Thornthwaite, will also, support the drunk driver, who killed a young cardiologist, and his bride to be? Just, where in the hell do we draw the line here? Now, it is fine for governing officials, to drink and drive. Therefore, this is fine for everyone, or what? Thornthwaite and Campbell were both drunk enough to catch the eye of officers. Drunk driving is a criminal offense, and the two of them, should be kicked out office, right bloody now.