Now suddenly a $million dollars shows up in his common law wife`s numbered  company, ..The money coming from the Peguis First Nation band in Manitoba..A First Nation who was under Vic Toews Purview for years, ..A First Nation that received hundreds of $millions in Federal funds, funds Vic Toews directly lobbied for.. 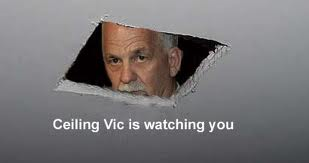 And how much was the big, fat, juicy taxpayer financed package you received when you suddenly and inexplicably resigned virtually on the eve of Stephen Harper's cabinet shuffle last summer? Perhaps voters should organize a tag day for "Poor Vic."

This story has the feel of having the potential to grow legs and blow up all over some individuals.

Sincerely,
Clare L. Pieuk
________________
And  elizabeth Thompson dug out these goodies even before this latest revelation.. 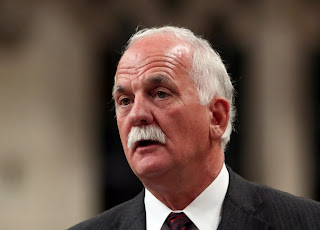 Former Public Safety Minister Vic Toews has embarked on a new career as a lobbyist and a consultant, working through a company that was incorporated by his common law wife while he was a federal cabinet minister, iPolitics has learned.

Records show that Toews has been lobbying provincial officials, cabinet ministers and staff in Premier Greg Selinger’s office in his native Manitoba in connection with at least three separate issues. Toews began actively lobbying only two months after leaving the House of Commons.

“I’ve got to make a living,” Toews told iPolitics.

According to Manitoba corporate records, the numbered company Toews is using to lobby – 6572155 Manitoba Limited – was set up in September 2012. Toews, who quit as an MP in July 2013, was Canada’s public safety minister at the time the company was incorporated.

Provincial corporate records show 6572155 Manitoba Limited was incorporated by Stacey Meek. Meek, a former political aide to various parliamentarians and the mother of Toews’ 6-year old son, was registered with the House of Commons as Toews’ designated traveler at the time he resigned in July 2013.

Toews said Meek is his spouse, although he acknowledged they are not formally married.

“We consider ourselves married,” said Toews.

The earliest reports filed on Toews’ lobbying efforts in September 2013 list Meek’s e-mail as the e-mail address for the company. The three subsequent reports, however, list Toews’ e-mail address.

All four reports list Toews as the person who lobbied on behalf of the client. There is no record of Meek lobbying the Manitoba government.

There is no record of Toews, Meek or 6572155 Manitoba Limited having registered to lobby the federal government.

While Toews is currently in a cooling-off period when it comes to lobbying the federal government – a fact he acknowledged in the interview — the federal ethics rules do not prohibit former federal cabinet ministers from lobbying provincial governments.

Toews said after he left Parliament he started getting requests for help on different files.

“I know a lot of people in Manitoba,” he explained. “Basically, it has been that people have come up to me and asked me to work on various files for them and so that’s what I’m doing.”

Toews said lobbying is not his principal occupation, adding the majority of his current work is “providing consulting services and strategic advice to various companies.”

However, Toews refused to name the companies that have hired him to provide strategic advice in dealing with governments or to say whether any of them are dealing with the federal government.

Toews said much of his work is in Manitoba.

“I have a good relationship with the current government, even though it’s not my stripe. My clients need things done and I get it done for them.”

While Toews’ lobbying has centred on provincial officials, there is some overlap between his current activities and his past in federal and provincial politics.

Toews met with Anna Rothney, Secretary to the Priority and Planning Committee of Cabinet in November. Provincial government spokesman Jean-Marc Prevost says a December meeting with Liam Martin, Chief of Staff to Selinger, listed on Toews’ lobbying report was cancelled and is due to be rescheduled.

The Jockey Club sued the Selinger government after the last provincial budget changed the portion of profits the Jockey Club would receive, a move that cost the club an estimated $5 million a year.

Prevost said Toews wanted to discuss the court case with Rothney but could not say what exactly Toews was seeking on behalf of Rath and the Jockey Club.

The Jockey Club has also partnered with the Peguis First Nation in a new company called FN Developments Incorporated which plans to develop Assinaboia Downs – a plan that includes two hotels, a conference centre and retail space. The developers have also said they would like to build a casino on the site in the future, however the province has made it clear it opposes another casino in the Winnipeg area.

Toews was among those present for the announcement of the new development in December.

When Toews was federal Public Safety Minister and the Senior Minister responsible for Manitoba, he helped settle a longstanding land claim that resulted in a $126-million federal government payment to the Peguis in 2010.

In 2011, while Toews was Public Safety Minister, the Peguis also received a $646,045 grant for a special crime prevention project involving aboriginal youth to run from 2010/11 to 2013/14. The Peguis were one of four groups to receive funding under the project in Manitoba.

Prevost said Toews wanted to inform Chief of an upcoming announcement concerning plans by the Manitoba Metis Federation to open a chain of pharmacies on reserves. Toews, however, says he didn’t discuss the pharmacy project with Chief.

“It’s not to do with the pharmaceutical (project),” Toews said.

The Manitoba Metis Federation also received funding from the public safety department while Toews was minister. In 2011, the Federation received $147,200 for a case study over two years to “identify elements of existing integrated urban Aboriginal community planning.” Under a second grant, which runs from 2009, just before Toews became public safety minister, to 2013/14, the Federation received $499,701 to deliver a justice support program in aboriginal communities.

Toews’ lobbying report shows his first meeting was September 23 with Manitoba Mineral Resources Minister Dave Chomiak and Chomiak’s Assistant Shirley Heppner. Prevost said the meeting with Chomiak was not pre-arranged and Chomiak advised Toews to contact officials at Manitoba Public Insurance and the Workers Compensation Board.

Toews reported he then met with officials from Manitoba Public Insurance and the Worker’s Compensation Board.

Warren Preece, Spokesman for Manitoba’s Workers Compensation Board, said Toews sought the meetings to interest the Board in a pain assessment tool developed by his client. Officials in the Board’s health section are currently analyzing the tool to see whether the Board should purchase it, he said.
elizabeththompson@ipolitics.ca
________________
And isn`t that interesting, VicToews was asked to recluse himself as the judge hearing the case in a Manitoba court...
Sheesh....Doesn`t this cronyism and corruption ever end, the question in 2015 isn`t who is corrupt and on the take, the question is....Who in elected office isn`t corrupt Please stand up...
The Straight Goods
Cheers Eyes Wide Open
Posted by Grant G at 10:59 PM