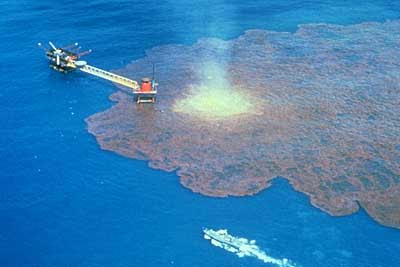 It looks like the British Petroleum oil spill in the Gulf of Mexico has sprung back to life, this was expected by many experts, and to think Terry Lake, British Columbia`s Environment minister is calling for the offshore oil and gas drilling moratorium to be lifted, good gawd Terry Lake, you are so stunned and so in the pocket of Enbridge, May14th 2012....Enjoy your last days idiot!

47 3
2 Comments
Here we go again. Federal officials acknowledge that they’re investigating a new oil sheen in the vicinity of the 2010 Deepwater Horizon disaster that killed 11 workers and spewed 5 million barrels of crude into the Gulf of Mexico. The announcement from the National Oceanic and Atmospheric Administration, or NOAA, says that British Petroleum is involved in the probe and that the source of the fresh oil could well be BP’s damaged rig.
Here’s the incident report that was posted with little fanfare by NOAA’s Office of Response and Restoration on Sept. 17:

This hotline is being started for new reports of sheen of unknown origin in and near lease block Mississippi Canyon 252. This incident is likely related to reports in August 2011 (See incident #8345, Aug2011). Although the source of these sheens may be the wrecked BP Macondo Well, this relationship has not been established at this time. Activities include daily overflights sponsored by BP, with USCG or NOAA observers on board intermitently. BP is sending a vessel to the area with an ROV to investigate the potential source.
This news is dismaying and upsetting, but it does not come as a complete surprise. As alluded to in NOAA’s incident report, oil leaks in the area have happened before in the time since the unchecked flow of oil from the damaged rig was first capped in the summer of 2010. Last August, officials confirmed a fresh leak of sweet Louisiana crude from the Macondo field where the BP rig had exploded. Both BP and federal officials tried to initially deny the problem when the story was broken on this blog, but shifted gear after pilot Bonny Schumaker from the Wings of Care, followed by independent journalists, confirmed the oil sheen and the pungent aroma of crude which was fingerprinted fresh Macondo oil by several laboratories


I`ll have more to say on this later, for now let`s pray that this leak is stopped pronto...

I wonder why?....Enbridge and Stephen Harper

That is the worst nightmare, coming true AGAIN!!

If Terry Lakes mouth get's any bigger, perhaps he can get both of his feet in it. That kills the BC Liberals, for sure now.

There is no doubt. Harper, Premier Redford, Terry Lake, Enbridge and the BC Liberals, are all brain dead fools. I guess we all knew that anyway.

I certainly hope, the BC NDP can come up with a good plan, to stop all of this incredible stupidity. No-way must we allow, the Enbridge pipeline, the dirty tar tankers, nor Terry Lake to drill off shore oil wells.

I know the F.N. People are fighting this as hard as they can. If need be. I have pledged to stand with the F.N. right in front of the bulldozers.