Christy Clark, Harvey Oberfeld, British Columbia is Not for Sale at Any Price 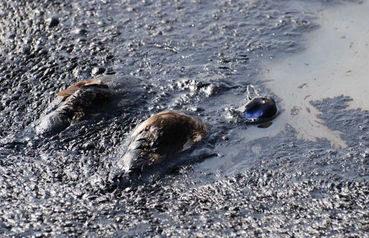 The enbridge chronicles are there, only those so obtuse, so deliberately stunned or paid by big oil would say different.. No respect given to old tired ex-journalists, I call them the way I see them...Th ose who don/t change and adapt get left behind, the two mentioned below are but passing names, soon to be forgotten, both contributed nothing to society, both self-centered creatures who worked for money, no questions asked, no morals, no intelligence, both a waste of skin..

How many effing oil spills do we need before we say enough is enough..

Christy Clark is truly stunned, an election ploy to garner votes, matters not, what few votes she might gain she will lose as many from her remaining died-in-the-wool staunch corporate whore voters who remain trua to BC Liberal pork fat..

As for Harvey Oberfeld, the man is obtuse, too old and too close to the grave to give advice on oil pipeline, actually Harvey Oberfeld is a bolc-faced racist, he hates French Quebec, he hates everything the NDP stands for, but he has no problem lining up for and demanding ALL those socialist goodies like pensions, healthcare and the like, Harvey Oberfeld hates First Nations because he believes they(First Nations) are taking HIS money...He/s forgotten who owned this land and resources, who owned it for thousands of years..

Harvey Oberfeld is also an Environmental racist, a fat pig oil burning, pipe it, dam it, burn it, ...And as Harvey Oberfeld lashes out at NDP and their belief he wholly embraces China, a communist tyrannical dictatorship, a Government that tortues, abuses and poisons its own people, a country that has shipped its poison in milk, in dog food, cat food, fake medicine, toxic toys...A Communist country that looks the other way...

Yes indeed, Christy Clark may be lacking a brain, for that she is forgiven, but Harvey Oberfeld is a deliberate stain on society, a racist bastard who nary gives a shit about anything but his 7é11 refunds and his cheap vacation, a tired old hack who/s best days expired decades ago..

There is nothing left in Harvey/s soul, an empty pit, a sad old man pretending to be relevant, a hater of bikes, fish, brown blood, an old school racist who deplores the left yet partakes of all the advatages the socialist left gave him..

Foreign state-owned companies are buying up our natural gas reserves:

Then they get BC Hydro providing cheap subsidized power to produce LNG for shipment.

Well, the majority of comments Harvey received on that article did not support him, though he tried to get the last word on most of the comments, he was making about as little sense as most of the key players at present are making about the entire pipeline fiasco.

By the way, I think it's fine to get as angry as you like on issues you really care about, but at times you come across pretty hypcritical - I mean calling other haters/racists etc -- with the venom, hatred and bitterness you express towards some people/bloggers at times -- it's pretty rich. They are human beings, maybe with very different thinking than our own, but that's no excuse to go on the personal attacks on people.
You can be a great writer and dig deep, and go after things a lot of others don't, and your humour is great at times, but if your numbers in the way of blog hits aren't as high as some other bloggers out there and that may be what bugs you sometimes, just wondering if a part of that is self-inflicted, you may want to consider.

There are times when your anger at the destruction of this province, gets the best of a lot of people.

Every damned thing of value in this province, has been thieved and sold. all we have left of BC is the beauty, our woodland wild animals. Our beautiful Orca and Humpback Whales, are directly in the path of the dirty tar tankers. There are thousands of species of marine life, in that route.

Now, they want to string a pipeline across BC, filled with lethal, chemical laced Bitumen. They want to bring massive oil tankers, into one of the most treacherous seas in the world.

Gordon Campbell and Harper did enough to BC and the people. Corrupt politicians in this country, are rewarded for their dastardly, dirty deeds.

Now, if all of that doesn't piss people off. What will? I will call anyone a s.o.b. that, sits there with their fingers up their noses, while the ruin of this country and our province, falls on top of our heads.

Some of us are sick to death of, lies, deceit, thefts, corruption, dirty tactics, dirty politics, broken promises and politicians, who cheat to win.