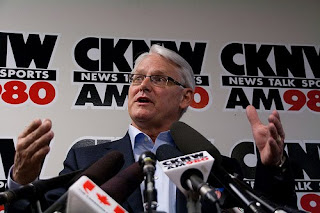 Well here we go, the British Columbia Utilities Commission has spoken, BC Hydro is broke and rates are going 7% as of April and this latest increase isn`t for power buying agreements but for interest payments on BC Hydro`s deferral accounts...

That`s right folks, Gordon Campbell`s BC Liberal party are guilty of cooking the books, these deferral accounts were a way for BC Hydro to show a phony profit, and why would they do that, the answer is simple, it was the only way the BC Liberals could take huge dividends and put money in general revenue...

In other words it was theft by the BC Liberal Government, Gordon Campbell and his IPP private power money transfer scheme which took public money and placed it in private hands, under Gordon Campbell and a complicit band of BC Liberal ministers and MLAs BC Hydro a once profitable crown jewel corporation is now bankrupt...

The reason is easy to explain,  under Gordon Campbell`s directive BC Hydro paid $billions to private IPP power companies for excess energy only to turn around and sell that power at a huge loss on the spot market..

"BC’s Bill 17—egregiously named the Clean Energy Act—represents a dramatic escalation of the provincial government’s electricity privatization agenda. The Act will gouge ratepayers, needlessly damage the environment, violate the principle of government accountability and undermine public finances. It includes so many bad public policies that it is hard to know where to begin an evaluation of its impacts."

The Tyee ran articles, I wrote dozens of articles warning of this exact scenario, John Horgan was on with Bill Good this morning just after the 8:30 news and explained what happened in clear concise terms...Gordon Campbell should be arrested over this, most BC Liberals should resign for their complicity in deliberate theft and the saddest part of the whole nightmare is how cknw and Global news not only defended Gordon Campbell theft but actually promoted it...

Rich Coleman has come out with his usual excuse making, John Doyle, our BC auditor General wrote a scathing report on these deferral accounts last year and was immediately bashed by the BC Liberals, Doyle just wrote another report about how the Liberals have failed on forestry and again he has been slammed, report after report by a real professional(John Doyle) lambasting the Liberals only to be mocked ridiculed by this horrid Government, out they come swinging, Falcon, Pat Bell, Rich Coleman, every single time these fiberals say that the auditor General is wrong, he`s mistaken, a difference of opinion and while that`s happening the Christy Clark edition of the same old corrupt Campbell Liberal party are currently bringing in legislation for a auditor General to monitor BC`s municipalities, the hypocrisy stinks,what`s the point, Christy Clark expects cities and towns to OBEY a municipal auditor while they not only ignore our provincial auditor they actively mock him..

For shame on BC`s corrupt media, infact bitter Brian was calling cknw and blasting the Liberals over the direction they were forcing upon BC Hydro 6 years ago or longer, we both warned of these IPP contracts, we warned of the wealth transfer, we screamed and yelled until our voices were horse, we talked about how signing 30 and 40 year contracts with these outfits at rates 5 times the spot market price was a recipe for bankruptcy..

"The B.C. Utilities Commission this week approved an interim increase that will see rates jump by 7.07 per cent starting in April — well above the 3.91-per-cent increase Clark was pushing as an example of how her government is looking out for families.

Adding to the setback, the independent commission said Wednesday that the higher-than-scheduled increase was necessary to offset the growing burden from BC Hydro’s practice of deferring current spending into future years."

And yet BC Liberal stooge media still cling to their own private illusion that BC Liberals are good fiscal managers when debt has been buried everywhere and our BC on the books debt has tripled in the last decade, these Liberals make the NDP of the 90`s look like miracle workers compared to the fiscal incompetence of the Campbell brothers..

And if anyone thinks the word LIARS is not accurate when it comes to Christy Clark and the Liberals one only need to view this blatant lie Christy Clark made this week in the BC Legislature when questioned on the disaster in BC`s justice department.

How did the Premier respond?

With a straight out lie is how.


Clark“But here’s the thing,....We are putting more money in at the same time that crime is dropping, the number of cases going to court is dropping and the length of cases is actually staying the same.  It just doesn’t add up.  We are adding more money to the system"

No here’s the real thing, Premier.  There is not “more money.”  There is less money.  As the following chart shows, the Attorney General’s operating budget has been cut by almost 20% in the last four years.

Forecast cost of IPP power to BC Hydro:

Power from new IPPs costs BC Hydro $100/MWh and up.

See here for the Mid-C rate over the past year, it has hovered between $20 and $40/MWh.
http://www.bloomberg.com/quote/ELGFMCON:IND

Thanks Hugh, appreciate the links..

I hear again on the dull edge of the ledge show today Vaughn Palmer and Bill Good are obfuscating and making outlandish excuses for these corrupt incompetent Liberals.

Rot in hell Bill Good you lying sack of garbage.

Just read through the above pdf and you'll learn alot.

It's about the water.

Enbridge is a sidebar, we really do need to be paying attention to the other things going on. Water is gold.

To the BC liaR style of doing "business" it isn't important to actually make a profit. The point is merely to move a bunch of money around and make sure it winds up in the right pockets, their pockets and those of their friends!

I seem to remember, Campbell thieving $778 million from ICBC. That was when he was in a lot of trouble, because of the Olympics debt. That money belonged to the people. Our insurance premiums should have been lowered, by that surplus.

I wonder what Harper's other favorite henchman Boessenkoll, will do? No doubt he will lobby for Enbridge as he did before.

Really strange, a Conservative running the BC Liberal government. Mind you, Campbell works for Harper, to this very day. Then they say, Harper isn't a Conservative, he's a Reformer.

Campbell is the worst, most corrupt and foul politician in Canadian history. Campbell should be tried for treason and jailed for life.

What a week it's been.

Christy, through her mouthpiece Shirley Bond, has backed down on having cameras in the courts just to stroke her own ego and provide future photo ops. I guess someone in her inner circle was finally able to draw her a picture that her vendetta against the rioters by tying up court time for skeptical reasons was bad optics. Another thing I find interesting is the claim by Christy Clark that new judges have been hired and all should be well immediately. This was in response to the NDP's battering of the Libs when a judge stayed another high profile case. Why didn't any of the reporters ask one simple question,"have these new judges begun their duties yet?".

Then we get the BCUC doing its job in the manner that they should and pouring water on the Liberal's attempts to buy votes by demanding BC Hydro temper their rate increase demands eventhough their financial situation is in the crapper. Hell, even Rich Coleman's bafflegab regarding the approved increase sounded hollow and unbelievable.

Then there are the two announcements that Christy decided were better made anywhere else but the Legislature. Talk about bad optics. How many people do you know that want to hold a position such as the Premier of BC but wish to have nothing whatsoever to do with the institution that comes with the job.

Then there is the tinkering with the HST regarding the adjustment to new homes. Didn't Colin Hansen state that the rates agreed upon with the Feds couldn't be altered for at least two years after implementation when he was still the Finance Minister? By my calculations two years would be July 1, 2012, not April 1,2012. Was he lying about that as well? This announcement may be good news for home builders and the few people that can afford to buy a home priced between $525k and $850k, but sure does nothing for the rest of us rubes. We will still be shelling out an extra 7% for all kinds of things that were PST exempt.

Finally, there are the couple of stories broken by Mike Smyth over the last couple of weeks. One about bullying and the other about the rewards programme available to government employees. The government has to be concerned by the way Smyth obtained this info. He has obviously got one or more whistleblowers. Mike was able to access password protected websites to corroborate everything, and as the saying goes, "loose lips sink ships". Methinks the Christyanic is about ready to be sunk.

Christy and Gordo, that new tax system of yours, the HST was a real money maker for the government. Lets have a good look at what has happened, The last year we had the old system according to you folks we had a balanced budget. Year one with the HST we went in the hole almost 3 billion, year 2 your prediction is double year one. You folks could not lead a sick cow to water. I am realy surprised that you can wipe you own asses. I don t think you should ever bring up the subject about the fast ferrys in the legislature ever again you may be a little red faced. My prediction is that not one of you will run in the next election. You will all be slurping martinies with the ceo"s of some corporation as you count the money that was directed to them. Free enterprize at its best, free for the rich and fuck the rest. Whats next for the free enterprizers the Provincial Conservatives, you have raped and pilaged under the name of Socreds and Liberals or are you going to bring back the old Reform party. Very interesting I wonder how many of you would have survived without the welfare cheques from Victoria over the last 12 years. I expect there will be some more GREEDY individuals to take your place. My spelling may be bad but you get the point.