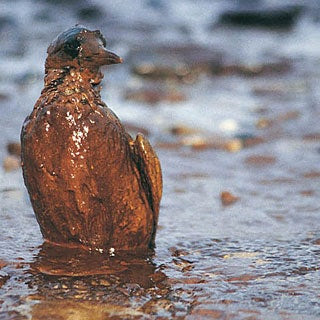 This is why the Enbridge Northern pipeline will not be allowed to proceed, this is why the moratorium on oil tankers in British Columbia`s inside waters will never be lifted.

Read about the latest disaster here....

Where is our Provincial Government, where is Christy Clark, stand up for British Columbia, stand up for salmon, whales, herring, sea birds, otters and eagles...

You can`t sit back Christy Clark and allow this Federal review to happen, you can`t negotiate after Harper rams it through, BC gets nothing but the risk, no jobs, just risk.

If you aren`t prepared to lead Christy Clark than step down, resign, Alberta oil pushers and Federal Harperites are running rough-shot over our province and what are you doing about it?

You are doing nothing but hiring ex-Enbridge lobbyists from Alberta as your new chief of staff...

Enbridge admits their pipelines will leak 1000`s of barrels of oil in BC`s wetlands and it`s now apparent that a CATASTROPHIC oil tanker spill on BC`s coast is inevitable...

Gordon Campbell lied about wanting to protect the earth for future generations with a phony green spin, BC advertised the 2010 Olympics as the greenest, we portrayed BC as a natural heaven, and now that Gordon Campbell has been sent to Europe to sell Alberta Tar oil, now that corporations occupy the BC Liberal backrooms you Christy Clark are sitting on your ass doing nothing, fire Pamela Martin, fire your other cronies, this is British Columbia...

You sit there doimg nothing while corporations prepare to scorch British Columbia...

You are unfit for office Christy Clark, you quit S-F-U- after they threw you off the student council for cheating on elections, now you are cheating our province...

Tell British Columbia today how you are supporting Alberta and Enbridge, tell us today..

You Christy Clark lied your face off on CKNW radio, you cheated on elections at S-F-U-..You quit S-F-U-...No degree, uneducated, a spoiled political brat with nary two brain cells..

Take a piss or get off the pot Christy Clucking Clark!

Jordon don t underestimate this bitch and her sluts. They aren t fools, just trying to fool the public. Just look at there past record. The lie, we aren t looking at an HST, BC rail is not for sale and this is all good for you. These assholes will say and do anything to get there way pushed threw. Have you seen there new assasination atempt on Adrian Dix on tv, its all bullshit. The sad part is, they believe there own lies. They will end up going the same place as the socreds, but they will leave us there legacy, of debt, oil spills, the poor working stiffs paying all the taxes and they will all have jobs with the corporations. Oh what a beautiful love story, almost brings a tear to my eyes.......

Christy is just another Campbell, she too is a Conservative working for Harper. Boesssenkool is another of Herr Harper's toads. BC is like a concentration camp, we never know who is going to attack us next. One thing for sure, I will never vote for the BC Conservatives.

Harper and his Conservatives and the Campbell/Clark BC Liberals, are all traitors to Canada. We know Harper is a Reformer. His party, the Northern Foundation was said to, have the skinheads organize the party. This was in 1989. Deb Grey said, Harper is still a Reformer.

Perhaps, we too will have to ask the U.N. to save us from Harper, just as the F.N. people in Ontario did. Harper was refused a seat in the U.N. We went to war, so we wouldn't have fascism and dictatorship in our country.

I'm sure Fadden of the CSIS was warning Canadians, that Harper was the one betraying us. He was the one, with the close ties with China. We knew Campbell was selling BC out to China, for cheap labor, and child labor is even more cheap. Our mill jobs were sent to China, along with our raw logs.

Yeah, it always annoys me when I think of all the mill jobs off loaded to China with the export of raw logs. Especially as one of those mill workers came to my town and eventually ended up with my job (truck driving, i had to teach him how to drive offroad - how to be a nice guy, and when you just have to assert yourself to avoid being forced off the road. How to drive a fuckin truck. How to drive in mountains and how to drive in mud. When it is sometimes necessary to stop and put your chains on before you get the point when it will be dangerous. I learned a lot of it in Alberta from French people from New Brunswick who had been coming there to work in the winter for years. But they didn't teach me anything until I had their respect. You will earn respect for taking the blame when it is yours, never stabbing your fellow truck driver in the back, and never, ever talking to the boss when someone else made an honest mistake.) Soon there will be Mexican truck drivers taking our jobs. Nothing against Mexicans and they are some of the finest drivers in the world, but I don't want to teach them all I had to learn the hard way and then lose my job to someone who will do it for the half the wages. FYI local truck drivers here drive in the worst conditions in the world are also the best drivers in the world. You are not a truck driver until you find yourself sliding off the road with chains on in the worst mud in the world and know how to get back on. [but your boss won't like it. So don't tell him.] You are not a truck driver if you won't stop and help a fellow driver even if you have to take a chance to do it. I'm not talking about myself, I'm talking about other drivers who have stopped and helped me. True, they may not have a MutherFuckerofBusiness degree from some university, but it sure is good to hear their voice on the radio when you are halfway up an icy hill on a snow blind night and need help getting back down for another run. When they shine their lights behind you and let you know which way your trailer is without ever yelling or telling you how to drive. Those are the best truck drivers in the world, right here in Northern BC. Some of them are little more than teenagers. Where the hell did they learn those skills in communication? Maybe, because some other night they were in exactly the same predicament? Maybe because some older truck driver taught them things which are otherwise learned the hard way? I would never have made it as a truck driver without a lot of help from my friends. What I had, I shared. But now I am sometimes loath to share what I learned with people I read as assholes. Globalism is just another way to exploit workers everywhere. We have, right here in BC, all the people we need.

We should ask Penner, now he has quit how far back Gordo and Stevie go back with there plan for this pipeline. Penner is an enviromentalist and would not be a part of this . Hence the resignation. I would like to know who else Harpo owes favors to. It sure plain to see he owed Gordo a favor. Or was it his oral skills that got him the job as high cummissoner, just curious.

Guess what, Penner is going to work for L.P, Barry Penner`s job is...


"Advising industrial investors how to deal with the Provincial Government"


In other words, Barry Penner is now a LOBBYIST for industry..

Let me know if you like this format for comments..

You site looks great, your comments
section good too. (was having a problem as my computer was freezing up, put it down to cookies
or pabs!!

Your video on The Spirit Bear moved me to tears. We have a lot to lose in B.C. it's so beautiful.
Those in power will fall in good time the people of B.C.cannot be fooled anymore.
Thank you so much for your site and everything you do to make it so. You ARE the best!

Have a good year!

Hello Grant. I have to like this much better, because for the last 4 days I could not connect to your comments page at all! All 3 computers did the same.
Glad to see it's working for me again.
About the Clark regime: It sure looks like she is attempting to revive her election chances with photo ops daily in every rag and network. However, I have heard nothing so far about a snap election, which right now would be political suicide. As far as tankers of oil on our coast, one needs only to see the results of what happens when a lunatic runs a cruise ship aground. Still bodies to be recovered and hundreds of thousands of litres of oil about to spread out. It is unfortunate that the Liberals have brought this province to near bankruptcy which may require the oil revenue. But why does the oil jobs go overseas with only raw oil heading out. "Job losses everywhere thanks to corporate greed"!!