Christy Clark is a Godamn Lying Bitch, Just as Gordon Campbell was a LYING Socialpathic Piece of Shit 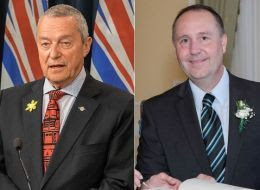 Today, December 31st/2015....The new BC Liberal education minister Mike Bernier had the audacity to blame the 20 year delay in seismically upgrading vulnerable brick and mortar schools on schoolboards ...Absolutely mindboggling that these BC Liberal can look themselves in the mirror...Effing asshole you are Mike Bernier


According to Education Minister Mike Bernier, in some cases the delays getting the work underway rest with the school districts.

"I think this earthquake is a perfect example and a wake-up call of why we don't want to be waiting any longer," said Bernier on Thursday morning.
"It's one of the top priorities that I have within my
mandate to continue to work with the school districts. The funding is there.

"Of course, the timing of that can only go as fast, and as quickly, and as efficiently as the school boards themselves work with us to make sure those priorities are delivered," Bernier said.

But according to Vancouver School Board Chair Mike Lombardi it's the ministry that is responsible for the delays stopping the upgrades from getting done.

There are 68 high-risk schools in Vancouver alone with no plan in place, and 21 of those are rated by the province at H1, the highest of the three levels of high risk, in the ratings system used by the province.

"We've done our preliminary work, but there's been no approval at the ministry level," said Lombardi this week.

"We want to get the job done," Lombardi said. "What we need is the government to step up to the table, live up to their commitment and sign those project agreements so we can start doing the work."


Read the below information, watch the question period...


"The BC Liberal government has failed to keep the Premier's promise to upgrade all schools in British Columbia by 2020. A timeline that was announced in 2005, re-announced in 2009, again in 2011 and again in 2013. But just two months ago the Minister of Education added ten more years to that timeline - saying schools would not be upgraded until 2030. Here's my question to the Minister of Education asking how his government can say school seismic upgrades are their number one priority but then fail to keep their promise."

Christy Clark, you are the most disgusting female ever elected to public office!!!

I hope that when the big Cascadia earthquake pops you are buried in rubble....don`t get me wrong, I don`t want Christy Clark killed in an earthquake, just a few broken bones, scrapes and cuts..

.Can`t wait to hear what excuse Christy Clark uses to explain to all those parents why their schools are all busted up.(Hopefully Empty) laughed when I saw the headline. now tell us how you really feel. Can't say I disagree with you. In my opinion Christy has lied, lied, lied. Of course perhaps she really does believe it all. One never does know. Any one who still goes around saying "we have to grow the economy" may well be shy a few bricks. Watching Mike deJong saying something to that effect at the finance ministers' meeting regarding improvements for CPP just made me laugh. Not only that he quoted the Conference Board of Canada suggestion that B.C.'s economy would grow up to 3% this coming year. He failed to say Christy and her gang pay that organization approx. $400 K per year. No wonder they sing the praises of B.C.

Most of us who get around know how high child poverty rates are and how low welfare/disability rates are. How high the wait lists for surgery are and how low the number of specialized nurses are. But hey if people want to continue to vote Christy into office, there isn't much we can do about it.

It will be entertaining when el gordo's term in London is finished and he has to return to B.C. wonder what they are going to do with him then.

You are correct about the "bitch" term..

All earth`s animals have a purpose, here for a reason, Christy Clark, not so much..

Thanks EAF.....Don`t get me wrong, I don`t want Christy Clark killed in an earthquake, just a few broken bones, scrapes and cuts...Dying to hear Christy Clark explain to all those parents why their schools are all busted up.

Ah...NVG..You are still numero-uno, the master at finding the smoking gun documents and data..

Happy New Year & thanks for some great reading.

What about private schools? Are they included in the province's schools at risk assessments? Private schools receive 50% per pupil of the funding that public schools get.

And now just days after "settling" with the two remaining health researchers,crusty rolls out free Champix and Zyban.I guess they know the "dean" and his ilk won't be covering this .So the bitch and big pharma get their way after all.How much will this cost taxpayers, and why to they need to charge MSP premiums if they can afford to give these drugs away for free? I'm sure there are no records for the public to see and that confidentiality agreements prevent any one "talking". Mr. Macisaac certainly can't.

Correct you are SD...On both counts..Big pharma donated big $dollars to the BC Liberal Party...

BC`s media, the Dean, the Balderdash, the Fletchersaurus,, Shitty Smitty..None will write the obvious truth as to why the researchers were attacked, fired and killed off..

That information was written by alternative media...As in The Straight Goods.