full disclosure, i'm not a registered member of any political party, however, I am definitely partisan...Andrew Weaver will not form government, either the BC Liberals or the BC NDP is going to win.FACT, ....I'm partisan for the people of BC, not developers, not real estate tycoons, not corporate extractors i'm partisan for seniors being priced out of town, young working couples struggling to pay rent, partisan for patients receiving hallway medicine, partisan for children needing help to succeed, partisan for average BCers who have seen their standard of living come under economic assault..

Greater Vancouver is sick, an unaffordable jungle, over the last 16 years of BC Liberal rule greater Vancouver has turned into the land of the rich and infamous, of foreign speculators, a corporate developer's fiefdom..

We had a BC Liberal government for 16 years that did nothing while society eroded, claims of prosperity when our debt has risen from $32 billion in 2001 to $77 billion today, not counting bridge debt, ferry debt, BC Hydro debt, and on and on it goes....Balanced budget claims when our provincial railway was sold against the public's wishes, a Gordon Campbell election 2001 LIE..I won't sell BC Rail...But he did....recent budgets have seen the BC Liberals sell near $2 billion dollars in provincial assets, ..LAND at bargain rates to developers, plus balancing budgets by plundering revenues from ICBC, plundering revenues that don't exist from BC Hydro...plundering revenues from a MSP tax that rose every year....asset sales, selling railways, hidden money grabs from ICBC, BC Hydro, MSP and more....From under funding education by $8 billion over the BC Liberal's term..scrimping on and short changing seniors and students, assaults on organized labour, trampled rights, highest poverty levels in Canada, food bank use skyrocketing and still Christy Clark chirps about success....it's a record of shame, of wrong-headed priorities, a record of who gives a shit about those that don't donate to the BC Liberal machine..

Yes, I am partisan for Democracy and fairness, for ethical governance, for soul.....for a sustainable future...

That's why i'm against Christy Clark and her organization..

The debate.....Andrew Weaver...Hi Andrew, thought you presented your case well, many of your ideas are very progressive and worthy of fulsome debate, however, ...BCers are not quite ready for a Utopian society, guaranteed incomes, minimum and maximum salaries, ....your Green ideas will cost a lot of money,....one day Mr. Weaver the people on masse will wake up and horsecollar corporations and demand equal share, demand a voice, one day when this capitalistic beast is slain...people are not quite there yet, getting close...anarchy, mayhem....when the bubble bursts...i'm on board...oh, one more thing, as a party, the Greens have never held office, meaning there is nothing from the past to criticize....sober second government, ...what is the date? in watching the debate, it felt like 2001, and yet the date is April 20th 2017....

John Horgan....yea John, Christy Clark gets on my nerves too,...reminds of a movie, a comedy movie, the lead actor/actress will be talking away while in the background a car drives off a cliff, or someone has collapsed and is getting their chest beat by a paramedic, meanwhile the movie star is oblivious to their surroundings, they just smile and keep on talking, nothing going on, not in tune with reality, nothing said or happening in plain sight will alter their train of projection.....You see John..Christy Clark has been blathering word salad ever since becoming BC Liberal leader...Facts don't matter, truth isn't needed, outright spin and distortion has been Christy Clark's modus operandi forever....

Distortion...no hospitals built in the 90s..Christy Clark's claim...right? What you need to do is say...in the 90's the silver tsunami hitting our hospitals today was only in their 50,s....Demographics, every goddamn economist including Michael Campbell has been screaming for at least 10 years about the coming tsunami of seniors....hospital hallways weren't filled with patients in the 90.s, ...BC's population wasn't critically old, it is now......

in 2017 Judges are releasing criminals because our courtrooms are underfunded..Healthcare underfunded..education underfunded, transit underfunded...Governments have hundreds of experts at their disposal who tell them all about demographics...shortages today are the result of ignoring demographics....You don't fix a BC Hydro dam 20 years before the repair is needed, you don't build new hospitals in the 90's for patients due to arrive in 2014...2016..

You John Horgan need to call Christy Clark out, then set the record straight...you need to look directly at the camera and tell BCers that Christy Clark will say anything, she will spin, distort, omit, embellish, and speak word salad....say it once, say it early and move on...you need to point out the massive debt increase under BC Liberals and remind voters of broken BC Liberal promises...Won't sell BC Rail..No HST..A doctor for everyone, seismic upgrades by 2020...Remind voters that Christy Clark and the BC Liberals have governed for 16 years and now....

Schools are falling apart...Hospital hallways are full...Children in care are dying, health researchers are killing themselves, our courtrooms are in serious trouble with shortages, seniors care is appalling, transit has been used like a political football, ..BC Ferries are cost prohibitive..BC Hydro is super expensive, those that do own houses are paying two-tier power rates not tier-one....BC Hydro's debt is over $20 billion, ..BC Hydro's debt alone will soon surpass the entire B.C. Provincial including crown debt from 2001...BC Hydro alone....ICBC has been looted....

But most importantly John....BC Liberals over the last 16 years have ignored Demographics and deliberately let these health and education shortfalls fester...they pretended the demographics weren't real...They lived in a fantasy land, ignoring the burning house...whistling past the graveyard..

And that will never change.....Speak the truth John...ignore Christy Clark....

My dad told me a longtime ago...."you can't win an argument with an idiot, or a liar, so don't try"

Bill Good....Bill Good lost control of the debate early.....i've seen worse though...I think Bill Good's best moderator days are behind him, that is if he ever delivered best?..also, there was visual shenanigans played by News1130 and City TV to frame clark differently than the others, colour coordination framing...it was no accident...Christy Clark wants the 2% of voters who can be captured through visualization manipulation.. 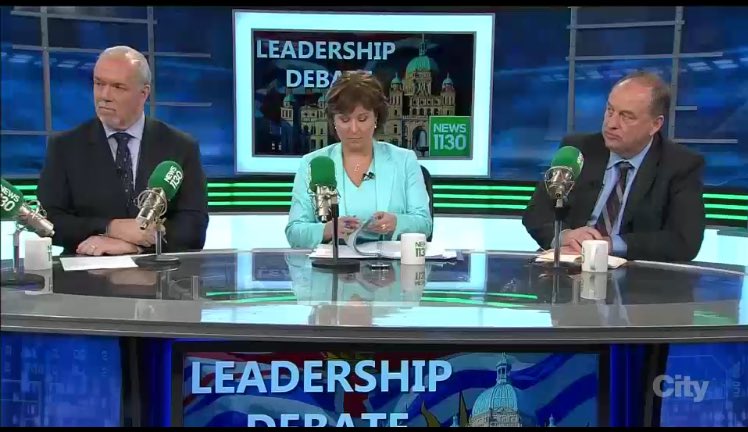 Look at that picture above...colour matching and framing...center framing and a little more...tricks of the trade for those wanting every conceivable edge...Nice try Bill, City, News 1130....Cheers Eyes Wide Open..

Christy Clark.....I have nothing to say...Christy Clark is the same manipulative word-salad spewing liar she was in 2001...She has not grown up mentally, not even a little, only thing that Christy Clark has grown in the last 16 years is her personal wealth!

except now theres oil on her salad.

and still no poverty reduction plan.

which party most represtents cognitive dissonance and gaslighting?

This is a good summary. It echoes my thoughts exactly.

Grant your points well made. I thought John made a grave error right off the bat by swinging over and interacting with her and loosing his cool. Like you pointed out he should have looked straight into the camera and spoke the truths and avoided her absolutely. She is so scheming it is frightening. Hoping for the best on the 9th but fearing the worst.

@anon 6:54 pm....well, I wouldn't be too worried, i've seen some internal polls..however, you are correct that John Horgan was rather aggressive with Christy Clark, and in most cases it would be fatal...But not in this case, the reason?....Because 75% of all BCers have a strong negative opinion of Christy Clark..

If John Horgan told as many lies as Christy Clark he would get pilloried by the press...The public notices, if Horgan mispeaks everyone pounces...Christy Clark can toss words around in a salad and spew them out....media gives noodles for brains Clark a free-pass..

anywho...the initial feedback i'm getting is...voters enjoyed Horgan giving it to Clark..she has garnered no sympathy...

Lastly....internal polls are really bad for Christy Clark my friends...and you ain't seen BC Liberal ugly yet..it's coming to town near you..

I agree with everything you said.

Memo to Good, quit while you are ahead, you were an embarrassment.

As soon as I realized billie was involved I knew it would be bullshit.

Christy shudda been a Playboy Bunny, but that train left the station about 25 years ago. And Billie Good needs a haircut.