My formal complaint against Christy Clark being filed with Elections BC and BC,s Conflict of Interest Commissioner Paul Fraser 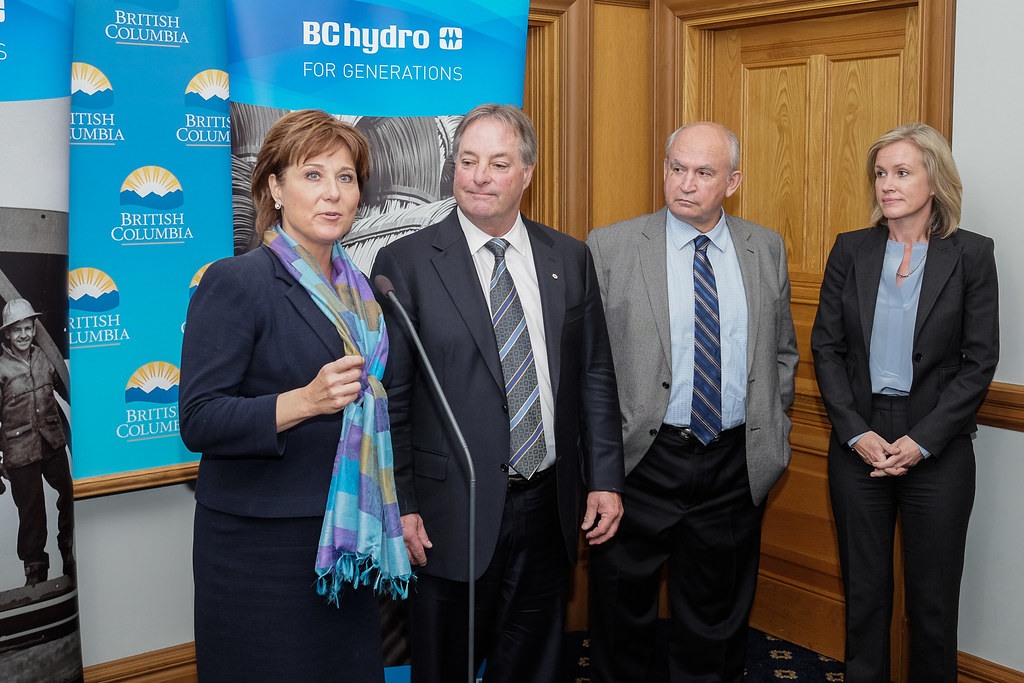 In 2015 Christy Clark and the BC Government appointed Brad Bennett to the position of Chair of BC Hydro...The term is for three years and runs into 2018.

Premier Christy Clark today announced the appointment of Brad Bennett to the position of chair of the BC Hydro board of directors. Bennett replaces outgoing chair Stephen Bellringer, whose term expires on Sept. 30, 2015.
____________________

Brad Bennett is paid over $60 thousand dollars per year, those are B.C. taxpayer dollars.

So in fact Brad Bennett is a defacto employee of the BC Government..

Site C is an election issue in 2017....Brad Bennett serves at the behest of the BC Government, Brad Bennett has a vested interest in electing Christy Clark, she appointed him to Chair of BC Hydro, which is supposed to be a non-partisan position..

It is, or should I say, highly inappropriate and a clear conflict of interest for Brad Bennett to join with Christy Clark on her campaign bus and promote Christy Clark in her bid to remain premier....he is paid by taxpayers..

I am aware that the infraction has not occurred yet, however, Brad Bennett doesn't deny it, the BC Liberal Government is not denying it, in fact ...

Ian Bailey, write for Postmedia wrote about in a Globe and Mail article dated March 27th/2017.....

Mr. Bennett, who has resisted calls to run for office himself, said he’ll again be a sounding board for Ms. Clark as she tries to lead the Liberals to a fifth consecutive term.
“I’ll be joining the tour from writ day to E-day,” Mr. Bennett said in an interview. The campaign runs from April 11 until voters go to the polls on May 9.
In 2013, Ms. Clark led the Liberals to a come-from-behind victory despite polls that suggested the NDP had a massive lead.
Now, in 2017, Mr. Bennett says it’s way too early to predict how things might play out for the Liberals, who are facing relentless questioning about their actions on political fundraising in the province. “Campaigns do matter. It’s never over until it’s over.”
Mr. Bennett’s day job is president of McIntosh Properties, a real-estate investment firm in Kelowna. He is also the chairman of BC Hydro.
______________________

The evidence is clear and not disputed.....When a Government announces that it is about to commit a clear conflict it is imperative that you step in and judicate on the matter at hand...

I am also filing a formal complaint to Elections BC..

Brad Bennett is a Government employee, Brad Bennett must not be permitted to make a mockery of Democracy..

BC Hydro is owned by the BC Government, it's a crown corporation, conflict rules do indeed apply.

Christy Clark in her capacity as premier appointed Brad Bennett to the Chair of BC Hydro...She in fact put $60 thousand per year in Brad Bennett's pocket.....Christy Clark is using the power of the public purse to enhance her reelection chances....

Anybody with even the slightest sense of ethics would recognize this clear conflict...Christy Clark doesn't care about this conflict..she is flaunting the conflict.....if you don't step in and put a stop yo it....Then it would appear that the Office of the Conflict Commissioner is useless...

I am aware that you(conflict commissioner) need this complaint faxed to your office and or mailed....you will receive that sometime today.

More people should do this. It takes a lot of energy, dedication and research, though. Most people are too lazy or don't know where to begin.

Thanks for taking the initiative. Taxpayers need more people like you Grant.

Good work Grant. Thanks for this and all your immensely researched articles.

Thank you....not too sure how far my complaint will go....kinda like turning in a person who says they're going to rob a bank in 2 weeks...

Brad Bennett has not yet joined with Christy Clark(on the campaign bus, they joined in another way already, trust me)....

asking Paul do nothing Fraser to make a preemptive ruling....I have little faith, after all, Paul Fraser's son works in Christy Clark's office...now there's a conflict..

I'm still waiting for Elections BC to respond back to me...the woman I talked to didn't have the experience to render an opinion, ....she has arranged for a senior Election BC staffer to contact me..

However...Let's make some noise..Christy Clark has a terrible stench about her, it's called eau de rotting corruption formula 5...

Christy Clark will have to explain why it isn't a conflict...when it is obvious...

Christy Clark is thumbing her pinocchio nose at the law, doesn't care about a glaring conflict...She is running scared and desperation is setting in...BC Libs are polling at a mere 28% in BC Liberal internal polls...

' they joined in another way already, trust me)...' yes have seen reference to this on Twitter recently.

Thanks Grant, every little bit helps.

pixy dust politics in BC ..but will the public go for it?

Only a BC Liberal troll would defend Christy Clark...I don't waste time arguing with idiots, you never win an argument with a fool..