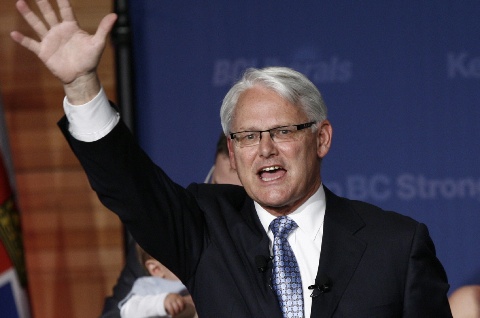 "Because of new found efficiencies by the builders of the Port Mann bridge it will be open a whole year ahead of schedule" Snip.......And just a few weeks ago Gordon Campbell had another photo-op next to the Port Mann bridge making the same claim.......Here is what Gordon Habitual Liar Campbell said at the first photo-op....Here

And here is Gordon Campbell repeating the lies on July 23/2010....This time with Shirley Glug Glug Bond, our new transportation minister...Read the lie again here

Well well well, today the real truth has been revealed, the new bridge will not be ready until December 2013...Not December 2012....He lied again, today it was revealed that the public will start paying tolls in December 31/2012 but the bridge won`t be complete, there will still be congestion, there won`t be the 10 lane bridge that Campbell claimed but 8 lanes, there will still be ongoing construction for another year before the "New Port Mann bridge" will open up all 10 lanes!

Does this man? ever stop lying? Does Gordon Habitual Liar know what the truth is? I don`t think so, The people are already freaking out about having to pay tolls on a bridge that is only 75% complete , there will be the same old gridlock for another year yet people will be paying......Read the shocking admission and truth here

And don`t expext to find the Port Mann bridge lie reported in any Canwest bird dropping paper or Global news.

You couldn`t make this up if you tried!!!!

Grant, I live out that way and heading westbound over the PMB is a friggin' nightmare in terms of back-ups. At least the PMB will go from 2 lanes to 4 lanes and that will do the trick until the 5th lane is open. 10 lanes v. 5? Huge difference.

The toll will be $3 bucks and that kinda sucks. But I suppose if the Oak St. Bridge, the George Massey Tunnel, the Lions Gate Bridge, the Second Narrows Bridge, and the Queensborough Bridge all had one-way $1.85 (inflation-adjusted) tolls back in 1960 I'm gonna have to suck it in - Or take the new SFPR to the Alex Fraser Bridge if I don't wanna pay the toll.

Time is money. By that time, Shirley glug glug Bond and El Gordo will be long gone.

What part of 2 photo-ops telling the same lie don`t you understand?

Read the bottom link, the Port Mann bridge project is 4 years not 3....

The story is about an habitual liar not the bridge itself!

Campbell just continues his lies day in and day out in order to complete the theft from the people of BC. On purpose.

Sad state when any government assumes that whatever they do or say is the "way" things are and we all just should suck it up. The BC Liberals are toast and yes their party is almost over. Lies, Arrogance and the like will no longer be "the norm" in BC. Truth hurts eh Gordo...

There were no tolls on the queensborough bridge, the oak st. bridge or the massey tunnel. there were on the Lions Gate but were removed in the early 60's I believe. In any case had this habitual liar spent money on infrastructure rather than a new roof for BC Place so the Casino would look better, an new sea to sky highway that is completely useless and a convention center that cost more than double it's original estimated cost, just to name a few, perhaps we wouldn't be broke and could actually afford to build these bridges (which I'm not convinced we need) without parterning with private corporations. They own the bridge, we don't!

Yes, the waste for a roof, a casino, a highway Sea to Sky going to a ski resort. I assume there will be a toll on the new perimeter road once it's done? Isn't that what was said, tolls on new infrastructure. Oh, pardon me, the trucking industry, independent contractors, forest company owners, mining companies etc. wouldn't put up with that now, would they? Tax/toll the average, poor working stiff having to travel the Pt Mann every day for work. There should be no tolls on the Trans Canada Highway, period.
Hmm? Is there an end to the ferries at Horseshoe Bay coming? Everyone diverts to Tswwassen through Surrey, Langley, Delta and on to the lieberals mega ferries? Hmm? Just a thought.

I hope by NOW that the residents of BC don’t believe a word that comes out of the LIBERALS mouths. The HST, BC Rail...the list goes on. The MLA’s and Mr. Campbell should have to give up their FAT raises of last year come 54 percent for the premier is more than excessive and he does not even to the job. I think his performance review should be the first RECALL in the fall. Why not start there.

And still we are having these photo ops brought to us by the MSM without any critical investigation. For whatever reason both the federal and provincial governments announce the same things over and over again and the MSM treat these announcements as if they were just hot off the press.

Is the electorate so brain dead that they can't see they are being played? Or do they think that a lot of what the government does will not affect them? It is curious to say the least.

I suspect that the electorate has become to complacent. They just assume that the government is looking out for their best interests and focuses elsewhere. Maybe too many of us have become too comfortable with our situation and forgotten how we got to where we are.