Christy Clark the Liar, Not Qualified to be Premier(covered in thermal coal dust) 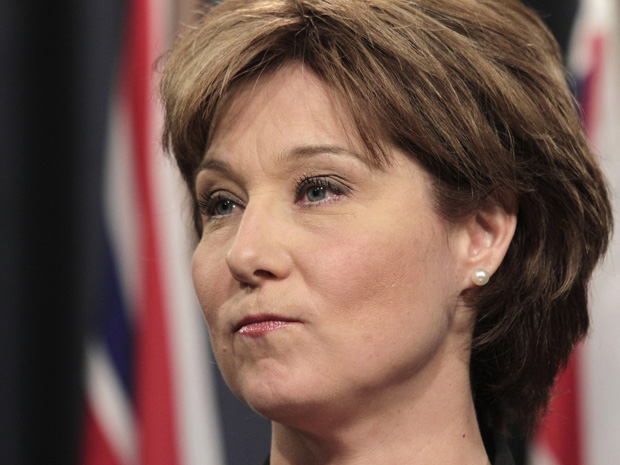 Updated MAy 2nd......(Christy Clark is at it again....Today, May 1st 2017 Christy Clark blustered and I quote..."If the federal government denies our request to ban US thermal coal we will impose a $70 dollar a tonne carbon tax, making it uneconomical to ship" snip.....

If John Horgan unilaterally proposed an ill conceived retaliation trade policy on the fly during the heat of an election our mainstream media would label John Horgan as a hothead, not able to control his temper, not fit for BC's top spot....not fit for the job of Premier...

Last week when our American neighbours imposed a 20% duty on Canadian softwood lumber Christy Clark(again) opened up her big mouth and started flapping her lips, clucking before thinking, speaking word-salad, speaking gibberish, talking like a scorned teenage girl....cluck cluck clucking without thinking about potential consequences..in 2013 Christy Clark blustered how B.C. was going to retire our debt and become LNG rich by charging Japan 5 times the North American price for LNG.....the audacity of Christy Clark calling kettle black...Clark not only stepped out of her jurisdiction as to who has authority over cross border trade but she blustered, and I quote..

David Emerson, our Canadian envoy on the softwood file has distanced himself and Canada from Christy Clark's utterings...Fraser Surrey docks have distanced themselves from Clark, as have Port Metro Vancouver...

This is such a big story, i'm amazed no one has given this issue proper scrutinization..until now..

#1 First off, Christy Clark has no authority to do what she proposed, it's a federal responsibility..

#2 Secondly, Christy Clark has an election attack ad featuring references to Donald Trump, telling BC voters that Donald Trump is coming after everything British Columbia, intellectual properties, agriculture, tech, forestry, banking services, you name it Trump is take it, take it all..

Groups that want a full environmental review of an expansion at a Texada Island coal-handling facility are outraged the B.C. government quietly approved an amended permit without telling local residents or First Nations.
The amended permit allows Lafarge to store 800,000 tonnes of coal, double the previous amount. The will enable Lafarge to handle thermal coal from the proposed $15-million Fraser Surrey Docks coal-handling facility.
That project, yet to be approved by Port Metro Vancouver, would take four million tonnes of thermal coal annually from the U.S. Midwest, load it on barges and ship it to Texada Island for loading onto large cargo vessels.
There is the potential for further expansion to eight million tonnes each year, but that would need another review.
There has been significant opposition to the linked projects over concerns about greenhouse gas emission from coal burned to produce energy in Asia, and potential local effects from coal dust and train emissions.


Lafarge’s amended permit was issued on March 12, but critics only learned of it on April 10 through an government email.
“It’s an abuse of process. It’s shocking that this can occur,” said Donald Gordon, a spokesman for Coal Dust Free Salish Sea and a director of Voters Taking Action on Climate Change.
Critics want a more robust assessment of environmental and health effects, wider consultation and a public review.
Port Metro Vancouver has twice delayed a decision on the Surrey coal-handling project to require more environmental assessment, but that has not satisfied critics, including Voters Taking Action.
B.C. Mines spokesman Matt Gordon said in an email that mines permitting decisions are made by the chief inspector of mines, “completely independent of political influence.”
The public and First Nations were notified of the proposed permit change and a public meeting took place on Aug. 19, 2013, said Gordon. “Confirmations (of the permit change) have been sent in the mail to interested parties,” he said, in response to a question on why the decision was not publicized.
Gordon noted that Lafarge must adhere to environmental standards under B.C. mining regulations. The company must monitor water quality including for leaching of metal, managing coal dust with water sprayers and test nearby oysters twice a year for contamination.
Shíshálh Nation Chief Calvin Craigan said it’s clear the province is trying to push through its agenda at all costs without properly consulting with his people. The First Nation from Sechelt also learned of the permit amendment approval a month after it took place.
“They are amending laws, ignoring coastal communities, ignoring First Nations, and ignoring the impacts of this project on resources in our traditional territory,” said Craigan. “This project is not in the best interests of any coastal community.”
Donald Gordon said residents with concerns over the project are considering legal action on two fronts.
He believes they may have a case that using a mines permits is not legally appropriate for the scope of a coal loading facility, and also over their belief that coal is being spilled from the existing facility into the ocean.
Gordon said on four occasions since last summer, they have collected coal from beaches near the terminal. They had some of the material they collected tested, which showed a chemical signature consistent with coal and high levels of arsenic. High levels of arsenic are consistent with coal from the Quinsam coal mine on Vancouver Island, which Lafarge currently handles, said Gordon.
An email to the Voters Taking Action group from the Mines Ministry said samples they provided were not coal, but a woody debris.
Craigan said the Sechelt First Nation views legal action as a last resort and hopes the province will do a proper review and consult First Nations.
“But if it comes right down to it, our people will stand up and block that (expansion),” said Craigan.
________________

Canada's federal government is pissed off at Christy Clark for opening up her fat mouth and dissing Donald Trump while Canada is in negotiations with the embattled President of the United States..

David Emerson, our softwood envoy has distanced himself and Canada from the utterings of Christy Clark..

If John Horgan made childish remarks to the USA and to Donald Trump the media would pounce, call John Horgan NOT READY for the BIG CHAIR....

In April 2014 Christy Clark loved thermal coal from the USA....and now during an a election campaign Christy Clark is lifting her hoof and spraying urine on America and Donald Trump...That is not what a smart leader does, that's a child having a pretend tantrum because she thinks it will garner votes...

I don't understand why our mainstream media has given Christy Clark a free pass on her childlike rantings....actually, I do understand why...Postmedia wants a corporate bought government...eh Vaughn?

Alternative facts....I call them lies....Donald Trump lies, and so does Christy Clark, ...Christy Clark lies constantly on the campaign trail(as in now) ....Christy Clark also deliberately lied on many occasions as premier....

Christy Clark talks about being a tough negotiator, yet the opposite is true...

BC Liberals used their majority to ram through a project development agreement(PDA) with Petronas..a deal described by all, including BC Liberals as a "generational sellout" ..

Back to the softwood lumber dispute....we have had many softwood lumber disputes with our American neighbours and over time it will be resolved...but never has Canada retaliated to its own detriment by playing tit for tat...when you live next to a giant you have to step carefully, Christy Clark has not yet learned what it means to be a leader, a premier, Christy Clark is not mentally fit to have the job, not in 2013 and even more so today..

Canada/USA softwood deal expired over two years ago and Christy Clark sat on her hands and did nothing...because she was still pretending that LNG was going to make BC a trillionaire....

and now during an election campaign Christy Clark who is not premier, she is a mere candidate who is flapping her gums and spewing nation threatening word-salad..

Donald Trump, like Christy Clark is a bold faced liar, a narcissist, an ill informed dunce..

Donald Trump has been president for a mere 100 days, he's had no legislative victories, he's lost control of a fractured republican majority Congress, no wall blocking Mexico under construction, Trump's travel bans overturned not once but twice, ObamaCare is still there, he couldn't get his signature election promise of repealing ObamaCare through...he's given up on that...Trump has been under extreme pressure for his many ties to Vladimir Putin...He lost Flynn..lost bannon...Donald Trump executive team of twits have been running around like chickens with their heads cut off trying to put out fires....In other words...Donald Trump has had a miserable first 100 days(so has the world) and is starving for any kind of victory, even a paper victory, only a desperate fool would have said what Clark said..

Donald Trump, like Christy Clark is childlike, ...but unlike Christy Clark, Donald Trump has real power and a vengeful streak....Only a foolish Canadian leader, or foolish wannabe leader would poke the American bear at this time....You catch more flies with sugar than with vinegar...

However, with Postmedia and Global/CKNW .....silence and a free pass for Christy Clark..

Christy Clark is not fit mentally to be a premier....she lies on purpose, she insults, she sprays urine on everyone...Queen of pissing contests.

John Horgan is passionate.....Christy Clark is the only wannabe leader in election 2017 who has an anger management issue..

If Christy Clark becomes premier......Donald Trump holds grudges like no other and he won't forget what Christy Clark said about him on the national stage and in election attack ads...

Christy Clark single handed has set back any chances of a quick resolution to the softwood lumber cross-border dispute..

P.S. ..Happy Birthday dad, always thinking about and seeing you in my mind, like you never left....

“If Christy Clark was serious about thermal coal, she could have done something about it six years ago. Five years ago. Four years ago. Even a year ago. Instead, she waited until the last two weeks of an election campaign, to make sure that we didn’t remember that she’s been negligent on the softwood lumber file, and now she’s trying to put bravado ahead of good public sense.”