This report was submitted anonymously by NRI staff because of threatened O’Neill  government interference into the content of reports produced by the National Research Institute (NRI).

Papua New Guinea is one of the newer emerging gas exporting nations.   Current reserves are currently estimated by the United Stated Central Intelligence Agency at 226.5 billion cu metres, which gives PNG a world ranking in gas reserves of 43 out of 207 countries and territories.


ExxonMobil has been a joint venture partner in the development of PNG’s oil resources since the 1990’s in which Chevron was the principal stakeholder.   ExxonMobil became the operator in the country’s first natural gas development project, sourcing gas from the Hides, Angore, and Juha gas fields, also obtaining gas from the existing Kutubu, Agogo, Moran and Gobe oil fields.  The LNG gas project is a joint venture partnership, with ExxonMobil the principal stakeholder and PNG stakeholders holding less than 20% of the total share. 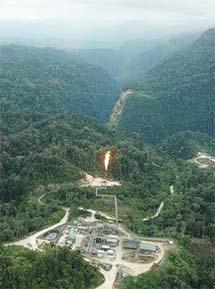 Photo-PNG’s oil and associated gas development areas, located mostly in Southern Highlands Province, show almost no tangible development despite over 20 years of oil exports.   The operations run with surprisingly few workers.  Most jobs were short-term, created only for the construction phase, and was heavy in expatriate labour.
EXXON MOBIL CONTROL OF PNG NATURAL GAS:   During the time when PNG’s Michael Somare was prime minister, energy supplying giant ExxonMobil successfully followed a much smaller PNG petroleum extractor, InterOil, in forcing the Papua New Guinea government to sign natural resource agreements that were to the great benefit of the developer and of no real benefit to the citizens.

Exxon Mobil effectively took away all rights of the PNG government to use PNG natural gas to meet domestic development needs.   Instead, virtually all PNG’s natural gas resources were to be dedicated to LNG export to serve the development needs of other nations.  Being that the LNG project came on line at a time of cheap natural gas prices, the project was most likely to favour LNG purchasers and least likely to favour LNG sellers, such as the PNG government. 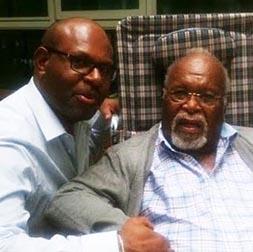 Photo-PNG’s then Prime Minister Sir Michael Somare and son Arthur Somare (left) were instrumental in creating and signing the LNG export agreement that gave full control of the resource to Exxon Mobil.


This lock tight agreement only come into public view in recent weeks with statements by PNG Finance Minister James Marape that Exxon Mobil would allow a small amount of “excess gas” to be sold back to PNG to alleviate its chronic power shortages, confirms what is appearing to be a remarkably successful Exxon Mobil strategy to take control of its PNG gas fields, making them essentially a sovereign state out of PNG control. 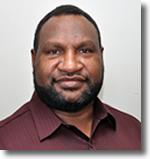 Photo-PNG’s Finance Minister James Marape admitted recently that the PNG government has to beg Exxon Mobil to be able to purchase any gas for PNG’s own domestic needs from the massive PNG LNG gas project.


Although the end result will be less headaches and possibly higher profits for Exxon Mobil officials, a significant driving force for the lock-tight agreement apparently came from company officials’ general disdain for the PNG government and its level of corruption.   As one Exxon Mobil employee put it, “PNG leaders over the past 20 years have proven themselves to resemble uncontrollably greedy baboons who can’t keep their hands out of the candy jar.

The company wanted to make sure that the Prime Minister and his cronies had no legal control over the resource whatsoever.”


PAPUA NEW GUINEA AND HOW IT USES ITS NATURAL GAS RESOURCES:  The loss of control over its own gas resource might come as bad news for the people of Papua New Guinea.   PNG has some of the world’s lowest human indicator index values despite years of natural resource extraction in many directions, ranging from minerals to petroleum to timber to tuna.

Government corruption has grown worse with the conventional wisdom rating the current government of Peter O’Neill as the worst ever.  O’Neill’s recent tenure as Prime Minister has been focused on avoiding arrest for an investigation of his involvement in securing a government bank loan that violated government regulations. 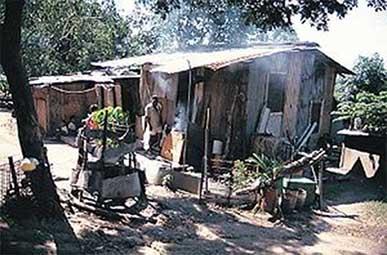 
PNG is a country where only a tiny fraction of its population has access to natural gas as a  residential energy source, with those fortunate few paying inflated prices for cylinder compressed natural gas.  Guaranteed hot water for washing is barely present, apart from hotels in its capital city Port Moresby.  For many years, the Hela Province capital, Tari, has existed on erratic small scale diesel generator power, despite nearby power lines transporting electricity from the long-standing Hides gas field-powered generating plant to one of the world’s larger gold mines in an adjacent province.
_______________________________

And in case nobody has noticed, British Columbia is soon to have its credit rating downgraded as a result of out of control debt accumulation..

Luster of B.C. bonds dulls under weight of provincial debt