Jenny Kwan, Have A Nice Life In The Private Sector 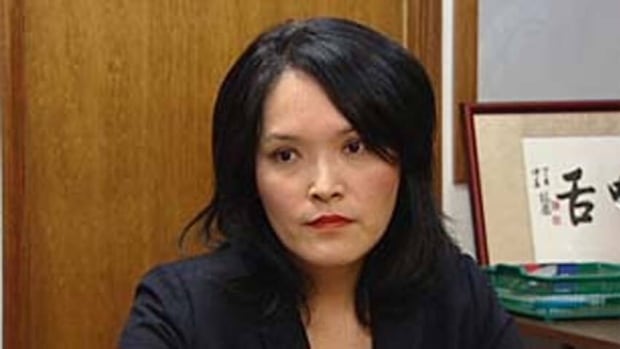 Let me first say that I support John Horgan and Mike Farnworth, I hope either one or both of them show real leadership and ask Jenny Kwan to leave the NDP caucus..

It`s true that the BC Liberals have committed outrageous crimes against British Columbia,BC Rail stolen, ethnicgate, Basi/Virk payoff, IPP`s bankrupting BC Hydro, the list is 100`s of pages long..

However, this site is called The Straight Goods, we hold no punches and we call it as we see it..

Yes Jenny Kwan has done good work for her constituents over the years, and I thank her for that, I have met Jenny Kwan and all I can say is...

This is totally outrageous..

Jenny Kwan has just finished a press conference trying to explain away this scandal and her comments are not satisfactory to me, Jenny Kwan has also announced that she is taking a leave of absence..

Unless your husband is a super-rich person like Jimmy Pattison or Aquilinni, .....

I`m not married, but I have sisters who are, my parents were married, my friends and associates have spouses and these people I know have one thing in common..


If a wife or husband buys the other half a trip, a car, a vacation, an expensive piece of jewellery or any other type of expensive gift, human nature takes over..

These conversations would take place.....

"Honey, what a great gift, did you put the bill on your visa credit card or did you write a cheque....Did you pay for it out of our joint savings account or out of our rainy day fund...Did you get a bonus cheque from work, did you win on BC49 or 6/49....."

This is what married couples do, what couples living together do, it`s human nature to ask who, where, what, how can we afford it, ....

Jenny Kwan has offered to repay the money, (over $34,000.00 for three trips, limo rides, $1000 dollar per night hotels, expensive dinners and the like)this excuse doesn`t fly, Jenny Kwan is a veteran politician, she knows all about conflict, perceived conflict and how it is not appropriate to accept gifts or perks without thoroughly vetting the source and checking with the NDP party..

Even if Jenny Kwan was legitimately duped by her significant other, mistakes cost people jobs, mistakes cost lives, mistakes can turn one`s chosen path into being lost in the backwoods, the NDP party can`t absorb this Jenny Kwan episode in a BC Liberal media friendly town..

It saddens me very much to write this article, why is it that politicians of all political stripes once in power too long become too comfortable, too accepting of gifts, perks and freebies, MLA`s make good money, their income without perks is more than double the average Canadian family combined income, not to mention housing allowances and extra cash for sitting on do-nothing committees..

Time to step up and make a statement, an authoritative statement and show British Columbia you have the cajones to be leader, and premier...I don`t expect Adrian Dix to do anything...He is no longer leader, and yes, You Mike Farnworth and John Horgan are not leader yet, but you both have access to media and a cognitive brain to make the right call and or make the right statement..

There was no legitimate reason for any Portland Hotel Society member or director to be in Europe, Brussels or Disney land..!

As judge Judy so famously says..

"If it doesn`t make sense it isn`t true"

Have a nice life in the private sector Jenny..

Putting to the side, Kwan's place in this debacle--I expected the puppeteers with knives to be out sooner,rather than later, but not this early.

Kwan's exposure has all the finger prints of carefully strategized take-down of someone who exposed themselves knowingly, or unknowingly.

To do get Kwan so far away from an election, tells me the greedsters are very worried about a renewed NDP. It's going to get ugly.

The new leader needs to make it clear within caucus that any MLA who makes a wrong step will be cut loose without any qualms.
hick from the sticks

When Jenny Kwan & Allison Redford are on the same page ; something is seriously wrong!!

Politician conduct 101: You are always "on". So, when you forget that, you generously hand the spin-meisters, and sound-biters a very expensive gift.
Sorry, Jenny thanks for hanging in with Joy, but, both you and Adrian need to let the past be the past for the good of BC.

FakeBrookWard ‏@FakeBrookWard · 3h
#JennyKwan was supposed to meet Mike Duffy and I for dinner and drinks on Glen Clark's deck tonight but she can't make it. #playingBingo

The PAB spammers and haters would have been quelled, if Kwan had simply said: I'm deeply ashamed, I have tendered my resignation, and I am making restitution to the Portland Hotel Society on behalf of my family.

Jenny Kwan is part of the same sleazy Sihota clique in the NDP that gave us Dix and will foist another dinosaur linked to past corruption upon us. Kwan led the charge to replace James because the party masters were convinced 2013 was going to be a landslide and wanted one of "their" people leading the party and not a nominal outsider. They hoped people had forgotten Dix's willingness to falsify records to protect the party or would somehow weigh it against Liberal corruption. Instead the swing vote saw no reason to trust the NDP to be any less corrupt and the party actually lost a few points off their last popular vote percentage.

Jenny Kwan is damaged goods but she won't ever have to look for work in the private sector: Svend the Thief hasn't had problems since his disgrace going from sinecure to sinecure funded by labour or other friendly groups. Jenny could easily keep her seat if she chooses to stay in office, but a sinecure may help boost the income lost without links to PHS.The suit only covered 3 years leaving a lot of other potential PHS funded trips to be discovered.

The rush to judgment does not worry about the facts here. Kick her while she is down seems to be the tone.

I warned during that last NDP leadership what would happen if Adrian Dix became leader...

Read what I wrote during the last NDP leadership contest about Adrian Dix..

Well here we go, coming down to the wire in the NDP leadership contest, three men left standing, Adrian Dix, Mike Farnworth and John Horgan, three superstars in their own right, let`s break down the nuts and bolts and get into meat of things.....

Adrian Dix, a pit bull, antagonistic, aggressive and capable, however, unfortunately Adrian brings out visceral feelings in people, he`s a love em or hate em type guy and those who hate him really hate him, personally speaking if Adrian didn`t have two sets of baggage with him I might have considered voting for him, the first set is the infamous memo-gate, Dix back dated a memo to cover Glen Clark`s rear end and got caught, that wasn`t a mistake of spoken words it was planned and executed, the Liberals will key on that in election ads and it will hurt, actually it`s probably fatal, that would be hard enough to overcome by itself but when you add in the sack of cash separate from the stack of memberships Adrian dropped off at the deadline for new members, I`ve been told a few hundred of those ballots have been rejected...I suspect the BC Liberals would run an election ad like this....The caption, (A young Adrian Dix), they show a young Adrian sneaking into an office using white out on a document then return it to the file, then the next caption...(An older Adrian Dix)..They show a man with sacks of cash and stacks of memberships laughing and tee heeing, it would doom our party..But Adrian Dix would be a marvelous health minister.

Don`t you understand what will happen during the next election, the BC Liberals don`t care, our media doesn't care, we as a party can`t afford top give the BC Liberals ammo..

Had those who voted during the last NDP leadership contest listened to The Straight Goods we would have an NDP Government..

I like Jenny Kwan on a personal level, she made a fatal mistake..

Unless her Ex-husband comes out and makes a public statement saying..

"I lied to my wife Jenny Kwan, I told her that I was paying for these trips out of my personal earned money, I used monies from the Portland Hotel Society, it was wrong and I`m returning every dime of money to my wife ex wife Jenny Kwan and I myself are repaying the society"

Unless that statement is made by Jenny Kwan`s ex husband..

Unless that happens Jenny Kwan is finished.

Don`t shoot the messenger, this is a self inflicted wound..

Nothing to do with team, favouritism, bias, or spindoctoring,...

I want 5he effing lying thieving BC Liberals out..

Every loose end must be taken care of..

This revelation shows a serious lack of judgement on Kwan's part.

I'm going to reserve judgement on what her husband, John Small, and that PHS management team—Mark Townsend, his wife Liz Evans, Dan Small and Kirsten Stuerzbecher--was getting up to.

Politically, it has given her opponents a chance to use this error to neutralize any criticism that the NDP may have been able to direct at the government for its horrible handling of this funding issue and related policies on the DTES.

And so, for tactical reasons alone, Kwan has to get out of the way, or else the enemies of the people will use it again to attack the NDP going forward.

@Jon Ghun no one has made your point in a less precise and economic way than you sir.

The NDP need spokespersons who can articulate complex ideas in a sound-bite formula.

Ha, ha Mr. Ghun, must have had John Less is not more on my mind.

Hope you got my point!

I'm mostly paraphrasing in order to second what the writer of this blog has already laid out.

@Grant: "Unless her Ex-husband comes out and makes a public statement saying..."

I am naive. But I would say that if JK's ex says nothing, that is the same as affirming her plea.

Next scandal will be BCLIB appointees caught stealing money from the poor and homeless...

PHS deals with the worst of the poor and homeless.

I doubt anyone the BCLIB appoints will do anything except continue the corruption.

After all, they will take a pay cut.

Plus I doubt any of them are competent enough to treat the poor and homeless fairly.