Enbridge And Stephen Harper Can Go To Hell 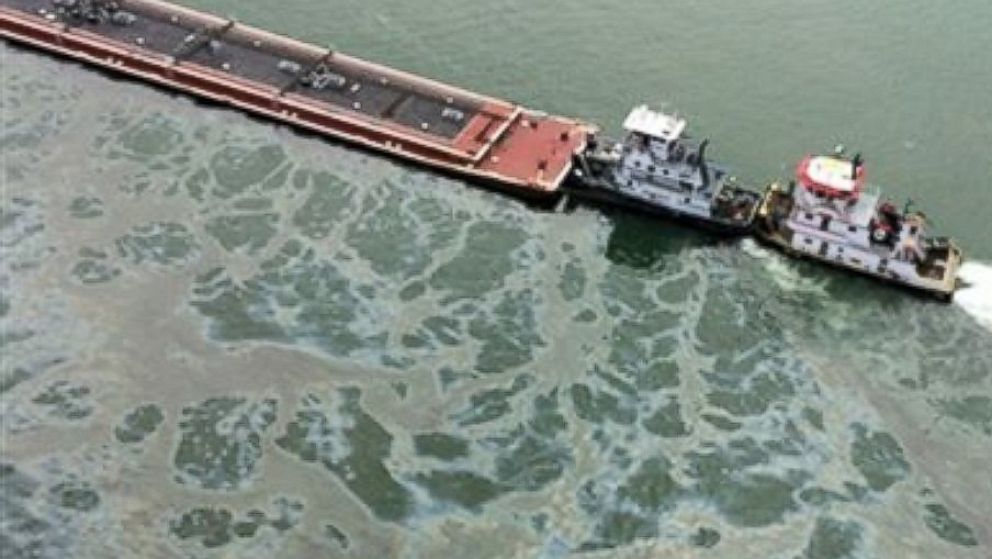 The below article is cut n pasted from ABC and the AP......Houston Texas oil spill, in Galveston bay, a collision between ship and barge, in a Texas harbour where oil has been shipped out of for many many years,  thick heavy goop, ....Today is also the anniversary of the infamous Exxon Valdez oil tanker spill, oil and tar balls still linger there 25 years later...

The point is, the point that Janet Holder and Enbridge can`t through their thick corporate greed oriented skulls, accidents happen, they are inevitable, the more oil moving vessel traffic the more spills will occur, ...Our northern BC coast is the hurricane winds, gale winds, storm force winds capital of Canada, the Hecate Strait the third most dangerous waterway in the world..

Our pristine temperate, one of a kind northern coast is a world treasure that can`t be repaired once broken, a supertanker oil spill will devastate our coast, the ramifications will be felt along the entire coastline of British Columbia..millions of birds, billions of fish, bears, eagles and orca whales will die...

Enbridge does not have any financial resources of substance to either pay for a futile clean up or to compensate the $billions in law suits that will follow..

The cleanup of an unknown amount of thick, sticky oil in Galveston Bay continued Sunday, a day after a barge carrying nearly a million gallons of fuel collided with a ship.


Crews are skimming oil out of the water and booms have been brought in to protect environmentally sensitive areas of the Houston shipping channel, Coast Guard Petty Officer Andy Kendrick said Sunday morning. The area is a popular bird habitat, especially during the approaching migratory shorebird season, and Kendrick said there have been no reports of impact on wildlife.
The spill was reported at around 12:30 p.m. Saturday by the captain of the 585-foot ship, Summer Wind.
The collision was still being investigated, Kendrick said, and the remaining oil is being moved off of the damaged barge, which carrying 924,000 gallons of marine fuel oil, also known as special bunker.
Officials still believe that just one of the barge's tanks was breached; the tank had a capacity of 168,000 gallons. On Saturday, there was a visible sheen of oil at the scene. Kendrick said it isn't clear how much oil spilled into the bay.
"A large amount of that has been discharged," Coast Guard Lt. j.g. Kristopher Kidd said Saturday.
The barge was being towed from Texas City to Bolivar at the time of the collision. Six crew members from the tow vessel were in stable condition, but it offered no details about their injuries.
The Coast Guard said that Kirby Inland Marine, which owns the tow vessel and barge, is working with the Texas General Land Office and many other federal, state and nonprofit agencies to respond to the spill. Tara Kilgore, an operations coordinator with Kirby Inland Marine, declined to comment Saturday.
Jim Suydam, spokesman for the Texas' General Land Office, described the type of oil the barge was carrying as "sticky, gooey, thick, tarry stuff."

"That stuff is terrible to have to clean up," he said.
Suydam said almost every private cleanup outfit in the area was out there helping out under the coordination of the Coast Guard and General Land Office.
Bruce Clawson, the director of the Texas City Homeland Security, told The Daily News in Galveston that the barge sank, but that there is no danger to the community, which is about 40 miles southeast of downtown Houston. Suydam said he could not confirm whether the barge sank.
The affected part of the Houston ship channel is closed to traffic, the Coast Guard said.
Richard Gibbons, the conservation director of the Houston Audubon Society, said there is important shorebird habitat on both sides of the ship channel. One is the Bolivar Flats Shorebird Sanctuary just to the east, which Gibbons said attracts 50,000 to 70,000 shorebirds to shallow mud flats that are perfect foraging habitat.
"The timing really couldn't be much worse since we're approaching the peak shorebird migration season," Gibbons said. He added that tens of thousands of wintering birds remain in the area.
Monday marks the 25th anniversary of the Exxon Valdez spill off the coast of Alaska. Suydam said that spill spurred the creation of the General Land Office's Oil Spill and Prevention Division, which is funded by a tax on imported oil that the state legislature passed after the Valdez spill.

These oilspill articles get no airplay in our big daily newspapers or on our local television stations, these accidents are a common occurrence, Enbridge knows this and don`t care, profits before the environment, Stephen Harper hates salmon, hates British Columbia, Stephen Harper only cares about increasing profits for oil companies, ....Stephen Harper once out of office will be taking directorships in more than one big multi-national energy company, the public must be aware and reminded of this fact, the public must also be informed of the fact Enbridge knows there will be ocean oil spills and land pipeline breaches in British Columbia, ...Enbridge knows there will be spills, in fact Enbridge knows they can`t prevent spills and freely admit that oil will be spilled and species will die, for Enbridge it`s merely business as usual..

Earlier that morning, the 750-foot-long double-hulled oil tanker FR8 Pride got under way from an offshore fairway anchorage, inbound to Corpus Christi. At 0704, about 14 minutes before the collision, a local pilot boarded the FR8 Pride to take the ship into port. At 0714, as the FR8 Pride was increasing to full-ahead speed on a northwesterly course in the Aransas Pass channel, the ship’s main propulsion engine suddenly slowed down significantly.

The slowdown was automatically triggered by the main engine’s electronic control system in order to protect the engine from damage. As a result of the engine slowdown, the FR8 Pride’s steering ability was greatly reduced, and the ship began an unintended swing to starboard, causing it to sheer out of the channel. Meanwhile, the MODU Rowan EXL I, also inbound to Corpus Christi, was about 400 feet outside the channel, on the starboard side and ahead of the approaching FR8 Pride.


The reason for the automatic slowdown of the FR8 Pride’s engine was that the cooling jacket on the engine’s cylinder No. 5 had suddenly cracked. Jacket water began leaking from the cracked cooling jacket, and the main engine control system (Kongsberg AutoChief 4)—detecting the resulting pressure loss in the jacket water cooling system—protected the engine by reducing its speed.

Stephen Harper doesn`t care about a goddamn thing except profits for his buddies in the oil business, that goes for Janet Holder...That`s why if Stephen Harper approves Enbridge and Enbridge attempts to build northern gateway there will be bloodshed, will be violence, will be war in the woods..

I mentioned that double-hulled tankers spill oil once punctured....

Let`s go back to Houston..

Ever since the Exxon Valdez oil spill in 1989 dealt a punishing public relations blow to Exxon Mobil, the company has been working hard to improve safety and prevent other oil spills. But accidents do happen (such as the massive Black Sea oil spill in 2007 – not related to Exxon Mobil – pictured above). One can imagine the first thoughts of the Exxon Mobil top executive in Houston (or at the headquarters in Irving) who got the phone call last Friday informing him or her that one of its chartered oil tankers, the 807-foot Eagle Otome (carrying 507,000 barrels of crude oil to the company’s refinery in Beaumont, Texas), had collided with a vessel pushing two barges in the waters of neighboring Port Arthur and was hemorrhaging oil.  DÃ©jÃ  vu?

The amount of oil that was spilled is estimated at about 462,000 gallons, and the severity of the incident forced the closure of the port of Port Arthur (about 90 miles east of Houston) and the temporary evacuation of a 50-block area around the port. The nearby Sabine Neches Waterway (in which the bulk of the oil was contained) was also closed. No deaths or injuries were reported.

Texas has had its fair share of oil spills. In September 2009 a two-mile stretch of the Houston Ship Channel’s north tip was closed for three weeks to let crews clean up 10,500 gallons of oil that spilled into the water after the 460-ft. Chemical Supplier struck a barge. It was the largest spill in Texas in 16 years, but nothing to compare to the one in 1990 involving Norwegian tanker Mega Borg that leaked 5.1 million gallons of crude oil about 60 miles off Galveston as the result of a lightering accident and a fire.
Accidents happens, and while the oil industry is more adept at protecting oil cargoes, and more speedy and effective in the clean-up activities after a spill has occurred than they were 20 years ago, oil spills are still the stuff of oil company executives’ nightmares, which more likely than not begin with.......

“Houston, we have a problem.”

All these facts are available in my side-bar Enbridge chronicles section..

So, for all of the above reasons and more we as a westcoast populous will not accept Stephen Harper and his cabinet approving Enbridge`s northern gateway pipeline project, there is no social license, there was no legitimate review process...The game was rigged..

Therefore Enbridge`s Northern Gateway project is dead....CKNW, CTV, Global BC and the thousands of other places you have advertised your proposed pipeline project thank you for the ad $dollars...

Cheers Eyes Wide Open
Posted by Grant G at 10:15 AM

Another great piece. I could only wish that more people were reading it.

The crowd was electric.


The crowd was electric,...

We had a nice chat..

From another article, but resources still the same.

British Columbia is endowed with enviable deposits of copper, coal, gold and natural gas. Yet I'm about to learn that without the demand, financial partnerships and technological expertise provided by Asian players, most of our valuable commodities would stay in the ground.

Canadians may be miners to the world, but we do not control our own destiny: we are price takers, at the mercy of shifting forces that will increasingly determine how, when, and for how much money, our resources will be taken.

Christy, (Gordo before her) the ex Alison, Stevie and Co.'s did and continue to sell us out to the detriment of every citizen in this country.

Enbridge has chosen a Limited Partnership-is to limit the exposure investors of the company, not to make good on a catastrophic spill.
12/07/05
business.financialpost.com

Petro-China puts in bid to *help* build the Enbridge pipeline.
May 29/2012
business.financialpost.com

Through the ages. Canadians have been taxed to build schools, hospitals, roads, power dams and such. Harper is bringing over foreigners, to take our Canadian resources and resource jobs, for corporations to exploit.

We in BC have had to battle, two monster outfits? Harper and his Cons and the Campbell/Clark BC Liberals. Harper is so paranoid of his safety, his security bill has doubled. Harper must think a lot of himself.