Season of the Which, Sandwich that is 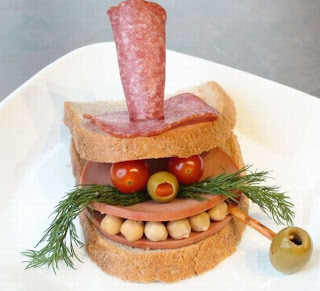 Pacing back n forth, cold dead sweat runs from brows of over-seasoned politicos in dark smoky war rooms, what to do, nowhere to run and nowhere to hide, swap a deputy secretary here and replace a press spinner there, listen to old tired friends or embrace the school of Hail Mary, welcome to the season of witch...

Yes indeed, Bob Plecas fearing the worst scenario, fearing an end to public service dollars being funneled to his corporate elite, fearing an end to chronic under-funding of schools, of justice of seniors care, fearing an end of corporate largesse handouts has come out swinging, come out advising, a tired oldman has crawled out from his rock to advise Christy Clark to be deceptive, to dictate, to confuse, to act as a single solo all encompassing power broker and run rough shot over anyone and everything that gets in way of the BC Corporate Liberals self perceived right to rule British Columbia, in other words Bob Plecas wants Christy Clark to act like Gordon Campbell and Stephen Harper but with a more Hitler-esque flair...Let`s have a look at Bob Plecas`s advice to Christy Clark....

1. The Campbell legacy will not go away. While it was the perceived deceit over the harmonized sales tax that brought him down, he was rap-idly losing conservative support by moving the party to the left, supporting the carbon tax and first nations settlements. The tax fiasco proved the last straw for conservative anti-tax voters."

Let`s tear this tired old conman apart, first off Mr.Plecas, it wasn`t "Perceived deceit" it was downright deliberate deception, Campbell lied about the HST, he lied about a $4billion dollar deficit, he cooked the books and as for Gordon Campbell`s phony carbon tax, all that scam tax did was reward corporations for polluting and strip dollars from schools, students, hospitals and the like, that carbon tax didn`t take 1 gram of carbon out of the air....And as for "supporting First Nation settlements".....That comment is so racist if you were in front of me I would slap your saggy face, the word settlement implies that we were here first, if anyone has settlements in British Columbia it`s white man, not First Nations, as as for Campbell accommodating First Nations no such thing happened, his reconciliation act died a swift death in the legislature from complaints from corporate racists like you..

3." Clark's biggest challenge does not lie on the left, it lies on her right.
She is a well-known federal Liberal, and the federal Conservatives are wary of her. There is great suspicion in Ottawa about her loyalties, and also among Conservatives in B.C."

The answer is yes. There are three reasons.

1. She is a great communicator. 2. The spotlight has not shone on Cummins, and some of his views, on homosexuality and first nations, appear under close scrutiny to be too extreme right-wing."

So Mr Plecas, John Cummins is a long-time Federal Conservative, with Conservative beliefs, and according to you....You want Christy Clark to use all her radio talk show host honed communication skills to call John Cummins an Indian hater and a man who hates Gay, Lesbian and transgender people....Isn`t that a Conservative trait Bob? On one hand you want Christy Clark to lose her Federal Liberal roots and embrace Conservatism and on the other hand you want her to attack a long-time elected Federal Conservative, seems to me Bob Plecas that you want to create a name-calling labeling hatefest with mud flinging every direction and see what sticks...Classy dude you are, welcome to the 21st century, how did that cryogenic freezing work out for you...

"3. Dix has past issues and strong ideologies that are also not representative of the majority of British Columbians, and these also have not been widely discussed"

Really Bob, you mean memo-gate, you mean the fact that Adrian has been elected 3 times by a large majority of his constituents in that riding, you mean you missed the fact that every contender against Dix raised memo-gate as an issue, and let me guess, you missed all those risky Dix ads ran by the Federal Liberal/Federal Conservative/BC Christy party, you must remember, they ran every hour on cknw, on Global news, on Spike TV, in the newspaper, ads attempting to portray Adrian Dix as ...Risky, not to be trusted, ads reminding people that Adrian as young man back-dated a memo but according to the BC Christy party Adrian Dix wasn`t a staffer but he was secretly premier of BC in the 90`s, the best kept secret in BC History...Yes indeed, obviously Bob Plecas you were still in a state of cryogenic freezing when those ads were running....

"What are Clark's options? 1. Continue down the path she is on. That is a sure path to opposition.

2. Go to Cummins and form a coalition. With the egos involved, that is unlikely."

Well Bobby Plecas, you want Christy Clark to change course, you admit that she can`t join John Cummins because after all, John is a homosexual hating, indian village burning dyed in the wool Federal Conservative, so what is your secondary plan?....Let`s have a look...


"1. The Enbridge Northern Gateway pipeline. Demand Alberta share the revenue from the pipeline between the oilsands and Kitimat as a condition for B.C.'s support. As proposed, Alberta would gain all the benefits, while B.C. takes all the risk"

Well Bobby Plecas, I`m glad you ADMITTED that BC takes all the risk and receives ZERO benefit....... That strategy probably isn`t too smart....Considering the entire town including city council of Terrace has signed up against Enbridge and Alberta, as have Prince Rupert and the Queen Charlotte regional district...That`3 ridings gone Bobby Plecas, care for another 82?

"2. Legislate a two-year tax freeze on the province and municipalities. The NDP can announce targeted tax increases all it wants.


3. Legislate to end the teachers' dispute. Stand on the side of students and parents, let the NDP stand with the teachers' union.


4. Legislate the end to the current public sector pension plan for MLAs and staff, and create a new plan, based on a private-sector model, for new hires and newly elected.


5. Terminate all bonuses for senior executives in the entire public sector. This analysis points a clear direction for Clark to remain in power. Move to the right; provide voters with a choice, through aggressive, controversial policy and legislative action - basically, attracting Conservatives back to the centre-right."

Well Bobby Plecas, you seem to like the Campbell/Harper approach..

Yet I notice when it comes to your suggestion about legislating a new modest pension plan for MLA`s and staff you threw in  little self preservation detail..."For new hires"....Meaning how dare anyone touch your bloated public trough pension....And as for bonuses for the heads of crown corporations and deputy ministers, how did think the BC Liberals managed to keep the whistleblowers from talking...


In a nut-shell Bobby Plecas, your advice to Christy Clark is...Use your communication skills to throw Federal Conservative John Cummins under the bus and call him an Indian hating, gay bashing dinosaur to attract more Conservatives to the BC Christy party, and to call Adrian Dix names and remind BCers of his radical agenda of helping seniors, students and a long suffering over-taxed middleclass British Columbians, and the most amusing part of your advice is you want to short shrift new MLAs and new hires while leaving the old guard including yourself with their public trough largesse..

Well Bobby, I have a novel idea, how about running on their record, how about running on facts, you want mud, lies, name-calling, you don`t want good Governance you want power for the sake of power......I have a news flash for you Bobby Plecas, Christy Clark has heeded your advice and for Adrian Dix and the NEW Democratic party of British Columbia..

Time for the NDP to eat your lunch!

BC NDP follows The Straight Good`s Lead and makes Rich Coleman look like a BUFFOON, Coleman loses his mind and turns red-faced over pure incompetence

More breaking news, New memberships surge for the Federal NDP, especially in Ontario and BC...Christy Clark hitches her star to the Harper, too late Christy Cluck, Harper has turned into a black hole, a pariah!

I find it unbelievable for anyone to state categorically that Christy Clark is a great communicator. Bill Good, Bob Plecas, her fan club from Cutting Edge of the Leg and in today's Province newspaper, Jon Ferry all claim she is. Is a good communicator not one that knows the subject upon which he/she is discussing and able to deliver his/her knowledge in a concise and coherent manner? Christy Clark has proven from her first go-round as an elected official to her radio career to this current stint as pseudo-Premier that she is capable of either qualifiers to be considered a good communicator. She is capable of spouting slogans that mean nothing and slagging anyone that does not support her views with verbiage usually found in a disagreement between a couple of kids in the schoolyard. The truth is that she is nothing but a vacuous mouthpiece.

Bob Plecas must still be living in the last century. His ideas seem to come right out of the playbook that the federal Liberal Party utilized for years, which I find confusing considering he is anything but a federal Liberal supporter. These are not ideas that reflect good governance but political chicanery designed to save a political party's hide.

A political party's fortunes in an election should not judged by only their last year's performance, but rather their performance throughout their total current mandate.

Didn't some of Falcons supporters desert and go to the BC Conservatives?

As far as Christy spouting off at mouth...There are too many of us trying to survive in this, horrendously corrupt province, including Christy's family's first. Christy is nothing other than a parrot, that repeats what she is told. The truth is in our wallets. That is something Christy can't lie about.

Did Christy ever have a debate? She doesn't dare. Christy knows, she would be torn to shreds. She is only capable of her, spiteful little child attack ads.