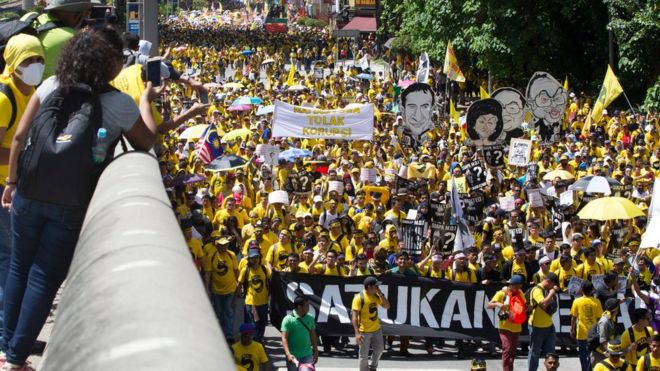 (Tens of thousands march in Malaysia demanding Najib Razak step down, the stench of corruption is wafting across the Pacific Ocean and is now permeating Rich Coleman's ministry)

Minister Coleman details PNW timeline
Pacific NorthWest LNG’s investors are scheduled to complete their total review of the project and surrounding market conditions, and decide on the immediate fate of the project in summer 2017.
That was the message given to B.C. Minister of Natural Gas Development Rich Coleman approximately a month ago by [company primary stakeholder] Petronas executives in Malaysia.
After reports surfaced last week through Bloomberg that Coleman was given an April 2017 date on whether the company would proceed with the project or not, the Ministry of Natural Gas Development confirmed that a decision is expected by Petronas and its partners before the end of the summer.
“Minister Coleman met with Petronas executives about a month ago in Malaysia. The business development trip was an opportunity for the minister to meet with the recently appointed chairman of the board for both Progress Energy Canada Ltd. and Pacific NorthWest LNG Datuk Mohd Anuar Taib,” the ministry outlined in an email late last week.
“Petronas and their partners are in the process of reviewing the various elements of their proposal, along with the 190 conditions within the federal government’s environmental approval. The company indicated it would complete the review sometime next summer,” ministry representatives continued, adding that the Malaysian trip was not related to the 2017 opening of a B.C. trade office.

Not a shovel in the ground related to LNG....Petronas isn't building anything in British Columbia..

That's why the BC Liberals are saturating our television airways with LNG blather...."$20 billion spent ALREADY" "and created jobs"...

Yea, it sure has, a job for Js Johal and Gordon Wilson...

Why won't our mainstream media call Rich Coleman and the Clark government out on it....LNG spindoctors muse about the LNG glut ending in 2020...it isn't, these LNG terminals take on average 5 years to build...If Petronas started today they would complete in 2021..

But they ain't...Petronas is not building anything in British Columbia, Woodfibre LNG is in doubt too...either way, not a shovel in the ground before the next election.

Petronas has moved on to other countries to do business..Iran is the top of their list, also ..this

The unit, named PFLNG Satu, left the South Korea’s Daewoo Shipbuilding & Marine Engineering (DSME) shipyard in Okpo on May 14.
Following a 2,120 nautical miles journey, the PFLNG Satu reached its destination on May 30, Petronas said.
It will be the world’s first floating LNG producing facility once it starts production in Kanowit gas field, located 180 kilometres offshore Sarawak, Malaysia, during the year.
The 365-metre long structure will be able to produce 1.2 million tonnes of LNG per year and is designed for water depths between 70 metres to 200 metres deep with 145 crew onboard.
Floating LNG producing units will be game changers in the LNG industry as they pave the way to unlocking gas reserves from remote, marginal and stranded gas fields, which would otherwise be uneconomical to develop.


Malaysian Minister for International Trade and Industry Mustapa Mohamed says Malaysian Petronas and Al Bukhary are to come back to Iran...

Malaysian Minister for International Trade and Industry Mustapa Mohamed says Malaysian Petronas and Al Bukhary are to come back to Iran.
Mohamed told Iran-Malaysia Trade Session in Iran Chamber of Commerce, Industries, Mines, and Agriculture that the Malaysia is keen on cooperating with Iran in oil and gas sector, Iran’s SHANA news agency reported.
“The two Malaysian companies, active in oil and gas, want to come back Iran and to this end, talks will be continued to be held with the NIOC.”

Oh indeed...Petronas has been very busy around the globe, at the same time they are deadly silent on British Columbia...Because, for the forseeable future Petronas is out of BC..

Petronas .....One day after Trudeau greenlighted the economically dead, now officially dead PNW LNG project ....The very next day Petronas went to Indonesia to make deals for this..

PUTRAJAYA: Petroliam Nasional Bhd (Petronas) has been offered to explore 10 new blocks of oil and gas (O & G) fields in Indonesia, said Deputy Prime Minister Datuk Seri Dr Ahmad Zahid Hamidi.He said the invitation involving seven exploration blocks in the Exclusive Economic Zone and three in Natuna Island was made by Indonesia’s Coordinating Minister for Maritime Affairs, Luhut Binsar Panjaitan, in a meeting in Putrajaya on Tuesday.Speaking in a press conference later, Ahmad Zahid said with the invitation, Petronas had the opportunity to participate in the open tender by Pertamina, Indonesia’s state-owned oil company, for the exploration of new blocks in other locations.“This is a good offer as Petronas is basically focusing on exploration in the Asean countries,” he said.

I would like to remind you of this...Natural gas reserves by country...

The BC Liberal Government is blowing LNG fumes out their asses....

Thus the saturation bombing advertising blitz...bragging about nothing, bragging about the two LNG jobs they created...Gordon Wilson and Jas Johal...oh, that's right, Jas Johal bailed out on the BCLNGA communication(spin) job.....And is running for the BC Liberals...

And yes, not even a one official murmur from Petronas on PNW LNG since August 28th/2016..

Najib Razak, the head of Petronas seems to be a bit preoccupied trying to save his political ass from jail and outright revolt!..

Thousands of yellow-shirted protesters have gathered in Malaysia's capital, Kuala Lumpur, to demand the resignation of Prime Minister Najib Razak. Australia now looking at importing lng for domestic use. I wonder if this is true or some more false news....